« UPDATE: Chased Into the Jungle | Main | MOVING TOWARD MUSLIMS: Making a Convert or Pointing to Jesus? »

When Joshua sent two spies to view the land of Jericho, they hid in the house of Rahab the harlot. Rahab’s house was built along the wall of Jericho, a wall constructed to prevent illegal passage of unwelcome visitors. When the king heard the Israeli spies were in town, he immediately sent word to Rahab. He instructed her to bring forth the spies, who had entered her home.

Rahab disobeyed the command of her king and hid the spies, even lying to protect their whereabouts. Later that evening, she secretly smuggled the spies out of the city by lowering them with a long chord through her window and down the wall.

Rahab knew little of the God of Israel, but she was prepared to help his people. She disobeyed her pagan authorities and even placed her life in danger. As a result, her life was spared.

A similar act of smuggling is found in Acts 9:25. Soon after Paul’s conversion, he spent several days with the disciples in Damascus, preaching and teaching in the synagogues. The Jews were so baffled by the change in Paul that they considered him a threat. The disciples lowered him down a wall to clear the city gates and spare his life from the Jews who were conspiring to kill him.

Some Christians believe that disobeying the governing authorities in 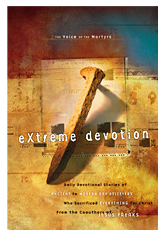 restricted nations warrants persecution. Are Chinese Christians who refuse to register with the official church deserving of the beatings they endure? In Islamic nations, do Muslims who convert to Christianity deserve to be stoned to death? While certain passages may be interpreted differently, all Christians agree that we cannot allow government to force us to disobey God’s laws. Of course, this does not permit Christians to exercise personal vendettas against the state. Disobedience is only warranted when we are forced to decide between loyalty to Christ and loyalty to the governing laws. Where do you stand on the issue? Study the Scriptures and decide for yourself, then share your thoughts in the comments to this post.

This is one of the readings from the book, Extreme Devotion, available from VOM’s online bookstore.

Pastor Chuck @ Broadmoor Baptist Church, Shreveport, Louisiana is speaking on this subject on Sunday evening.
You can follow it on your ipad.