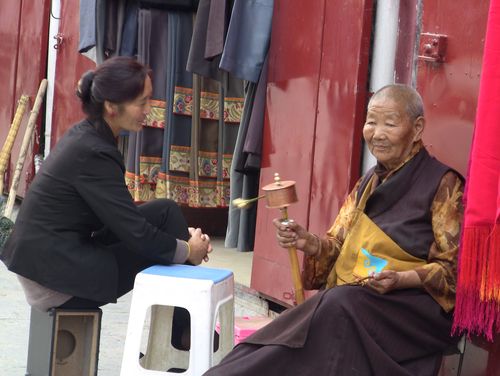 Imagine that you are called to be a missionary in China. You pack all of your belongings, sell your car, and board a plane bound for Beijing. When you arrive, you are overwhelmed because everything is different; the language, food, culture, and even the environment. It is a new world and it may take months to overcome the culture shock.

You may be surprised to learn that Han Chinese missionaries have much the same experience when they move to the Tibet Autonomous Region – a remote province in the lower half of Western China. Although they are still living in their own country, missionaries in this region experience a new culture that is in many ways foreign from their own. Earlier this year, I met with a Chinese missionary in Lhasa who came from the east of China almost a decade ago. He explained some of the difficulties that Chinese missionaries face in the region.

The first challenge that missionaries are confronted with right away in Tibet is the altitude. Since most of Tibet is higher than 9,000 feet, outsiders are threatened by altitude sickness. Then there is the climate – in the summers, intense ultraviolet rays beat down on Tibet’s inhabitants while the winters are usually cold and harsh. Temperatures on the Tibetan plateau can vary drastically in the mornings and afternoons.

If you can conquer the altitude and the climate, there is a new culture for you to assimilate to. Experienced Chinese missionaries know that in order to be most effective, they must immerse themselves in the lives of the Tibetan minorities. This entails studying a language very different from Mandarin, learning to like or at least tolerate foods such as yak meat and Tsampa (roasted barley mixed with butter tea), and reaching out to a local ethnic population who sees them as the invaders of their ancient lands.

The biggest obstacle faced by Chinese missionaries, however, is the intense spiritual warfare being waged in the region. Tibet is a Buddhist stronghold.  The vast majority of the Tibetan people adhere to this religion. “The streets are full of idols,” says the Chinese missionary. “All of these people worship these idols.”

A quick walk through the old part of Lhasa confirms this statement. Everywhere you walk and at all hours of the day, people are ceaselessly mumbling chants, rubbing their prayer beads in calloused fingers and spinning prayer wheels. According to the missionary, penetrating this spiritual darkness is extremely difficult – many of the Chinese Christians in the area, he says, are lazy and weak of faith as a result. Many more go home, disillusioned and discouraged.

As if these challenges weren’t enough, Chinese missionaries are often persecuted by the Chinese government, which maintains very strict control on religion in Tibet. Chinese missionaries have been thrown in prison and even kicked out of the province as a result of their efforts to evangelize the Tibetan. Evangelism in Tibet must be conducted very covertly and on a small scale level in order to avoid the wrath of the authorities.

Despite all of the challenges and difficulties involved, there are a growing number of Chinese missionaries who have found ways to be effective in the region. Better training and more support from church networks in the east of China have been important factors for missionaries who have chosen to stay long term in Tibet.

My missionary friend admits that when he and his wife first came to Tibet, they felt uncomfortable and out of place. But they also felt God’s grace and were able to adjust to their new home. Even now, ten years later, they often feel physically weak because of the altitude, but they are happy to be there because they believe that God is using them to reach out to the local Tibetan population.

Pray for these committed men and women who have sacrificed much to minister in a land that is so resistant to Christianity. Pray that they will be able to shine a light in the darkness and that the Satan’s ancient strongholds will be broken in the region. Pray for their physical health and their spiritual strength – and pray that the hearts of the local Tibetans will be touched.

So what if Christianity fails to grow in Tibet? Buddhism is their life. Buddhism is a beautiful religion with its Four Noble Truths and meaningful meditations on life which ends in death. It helps them so much. It also press them on to practice all the goodness in life urgently.

I am curious, Leah. What are Buddhists doing as they carry around idols--chanting and rubbing them? I have always thought of this as idolatry--but is this something different? Interesting comment that you made. I did feel that the article was well supported--though more of a "story" than an academic paper needing documentation. I, too, am concerned about credibility in journalism, but according to what I have learned from VOM, the writer has recently returned from visiting Tibet. So assuming that she/he is one of responsible character, I hope that we can repose these details and rest assured of the integrity of both writer and organization.

Leah, the term idolatry, and even the concept of worship of idols - including worship of the buddha - has broader meaning than the one you seem to be applying here. From the context of one Christian speaking to another, a broader definition would be assumed. The Bible itself uses the broader definition and says that even covetousness is idolatry. Col. 3:5. In this setting, the definition would be to honor something or someone above God, to put a created thing above the Creator in honor or obedience or preeminence in one's life. You point out exactly it is the buddha's teachings - not the Christ's - that are paramount, even though, as you rightly point out, the buddhas are just men, ones who are seen as having reached "enlightenment" as they define it. You accuse the writer of the post of "obviously" not having "done the research", but the writer is not saying this about the Tibetans worshiping idols, but rather is quoting the Chinese missionary. It's hard to know what was lost in translation. As Elvis would say, "Have mercy!" :)

Just by the way because you obviously haven't done the research, Buddhists don't actually worship idols or Buddha for that matter. Buddha was a man, which Buddhists believe reached enlightenment, adherents to the Buddhist faith don't worship him they live by his teachings....