How many non-Christians do you know who would be willing to go to prison just to ask a question about Jesus?

A few weeks ago, I was meeting with a VOM-sponsored evangelist who lives and works in the West Bank. He had been meeting with a young Muslim man from one of the Palestinian refugee camps once a week for several months, and the 25-year-old man’s life was changing before his eyes. As a boy, “Nisar” hated Christians and had thrown rocks at the evangelist’s church. But after studying Christianity in his comparative religions course while he was in university had raised questions in Nisar’s mind. 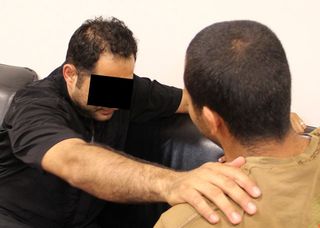 "Nasir" and the evangelist

Over a period of months, Nisar and the evangelists studied what the Quran and Bible said about Jesus.  After sever l months, Nisar decided to ask his mother, who was very religious, about some of the things he had learned. Nisar caught her in the kitchen one evening and brought up questions about verses in the Quran (Surah 2:87-89) that talk about the Torah, the Bible, Moses and Jesus. She avoided answering and accused him of drinking or taking drugs. Suddenly, she started acting different toward her son.

The next day, police showed up at the house and took Nisar to prison. His mother had arranged to have Nisar jailed. At a brief court hearing, the judge told Nisar he was charged with blasphemy. Nisar was thrown in a cell with the worst of the worst — murderers and rapists. By sending him to jail, his mother and father thought they could scare him away from ever questioning his faith again. Instead, “they didn’t change me,” Nasir said. “I saw that my parents, my family, no one loved me.”

He spent the next seven days in jail, and the only person who came to visit him was the evangelist.  The day he was released, he went straight to the church, where the evangelist encouraged him. Nasir eventually returned home, but he continues to meet secretly with the evangelist. His family wants to know where he is at all times. To meet with me in June, Nasir had a friend pick him up and drop him off so his parents wouldn’t know where he was going.

Though he spent time in prison just for asking about Christianity, he hasn’t rejected it. What he has rejected is the faith of his family: Islam. Nisar is not yet ready to give up everything and turn his life over to Jesus, but he’s on the way. The Holy Spirit is working on him.

His example shows how crucial VOM’s long-term support of evangelists is in tough areas like the West Bank. Changing the minds and hearts of people who’ve grown up with one way of thinking isn’t easy, and it takes a huge investment of time and love. And once convinced of the truth of Jesus, Muslims or others who want to follow Jesus must consider the huge cost they are likely to pay.

Please pray for Nisar. Pray that he will decide he is ready to follow Christ and be ready to pay the cost, if necessary. Pray for our evangelist, also, as he guides him along this path.