Tortured for Christ at 13 Years Old 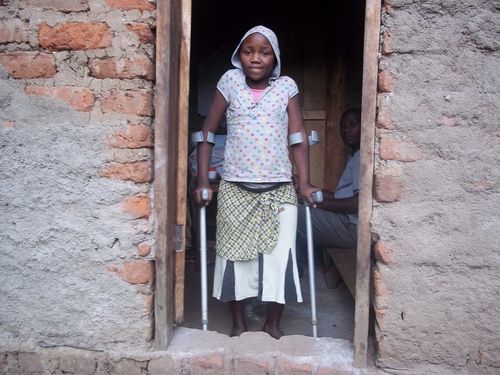 Susan was just 13 when an evangelist spoke at her school in Uganda and she turned to Christ for salvation. That year, 2009, marked the beginning of the troubles with her father.

At first, her father beat her because of her new faith. Then, in March 2010, he locked her in a room in their mud shanty. He kept her there for six months without feeding her, and she survived on roasted bananas that her brother slipped under the door when their father was gone. At one point, he threatened Susan and her brother with a knife, telling them he was ready to slaughter them.

Neighbors became concerned and told police, who rescued her from the home. While locked in the room, Susan suffered a bout of untreated malaria, and the long-term lack of calcium affected her growing bones. Joseph, a local pastor, visited her after her rescue and said she was bony, weak and unable to walk or talk. “Her hair had turned yellow, she had long fingernails and sunken eyes, and she looked very slim, less than 45 pounds,” he said.

After a prolonged hospital stay and two major operations on her left thigh bone, a local Christian woman volunteered to care for Susan. Joseph helped Susan and her caretaker, Dreda, find a small room to rent in a community far away from her father. Susan was happy to be safe, but her care has been a financial strain on Joseph and her caretaker.

VOM became involved in her case this year, and thanks to our readers, we have been able to help. Susan began a new school term at a brand-new boarding school this summer. The school is much better than the village school she previously attended. She has a special caretaker assigned to her at school to help her meet her needs, as she requires the assistance of crutches to get around and her school is not set up for handicap access. 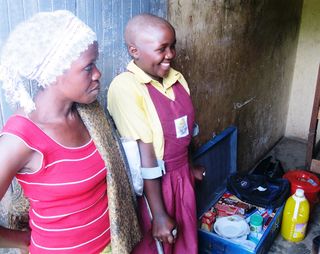 Dreda and Susan with her box of new school supplies at the school.

In his report this month, our field worker told about accompanying Susan to get her settled at school. He gave her a large box full of supplies for the new school year, provided by VOM readers. He wrote, “[Susan] is really promising and full of joy. She is happy for this opportunity to have help from God’s people. She promised to work hard and excel.”

The VOM worker also said Dreda was grateful for VOM’s support for their living expenses. Pastor Joseph asked him to pass along his thanks as well. “Please thank them so much, for we have not even dreamed anything like this before. This is indeed the work of God!”

If you have contributed to VOM’s Families of Martyrs fund, you are one of the ones who made this possible for Susan. If not, you can make a difference in the lives of persecuted Christians through a gift to the Families of Martyrs fund here. You can even choose to make that donation monthly, and help meet the ongoing needs of these believers.

I don't know if I really have enough money to commit to a monthly donation, but I wish I knew with all the financial trouble, that It was God's Will and therefore possible. My memory has been damaged 3 times and is being Healed by God, so I pray for my Brothers and Sisters in Christ Jesus everytime I remember. I want to visit Gao Zhisheng someday, especially if he's still in prison by then. I want to be constantly updated where he is! I may not check my emails everyday, due to the overwhelming volume I get and my sore hips and lack of concentration, but I will eventually read one of those updates. I honestly wondered if he had died, until I heard he was still in prison. I'd be willing to get tortured for visiting and encouraging him right in front of Chinese officials! I'm sure God wouldn't let me die in their prison, or Gao Zhisheng, not one of us without good reason. And besides, I've already been through some of the worst torture from the devil himself, and have still kept my Faith in Christ Jesus. I think this must be the longest comment you have from someone, so I'll stop writing now.

Thank you for helping her. I pray you be blessed and God help others in similar situations.

The justice for the father's sin will either be done in hell or it has already been paid on the cross should he come to believe.

Like others have asked . Should those who tortured her get away with their crime ? My prayers for her.

Praise God that she was rescued and is able to make progress. (Obviously, I know safety will be on ongoing concern.) I have the printed update from the June newsletter and to see this addtiional detail about her progress is very encouraging. I am grateful her brother had the courage to help her as he could. I am praying for him and also that her father's eyes and ears will be open to the Truth and that he will come to know our wonderful Jesus as Lord and Savior.

Her brother and father still live in their home. As far as I know, though there was a lot of outrage in Uganda at what happened, her father was never prosecuted. Part of the reason why VOM has been supporting her in a safe house is to keep her away from her father and keep her safe. We are thankful for the pastor and our national workers who are looking out for her.

My question exactly. What happened to her brother and father? Btw, what a good brother.

what happened to her brother and father?

Heart breaking. Praying for our brothers and sisters who are suffering. It is too much to bear.