Today, we are praying and fasting together for “Rashid,” a new convert to Christianity in Jordan who is going through trials because of his faith. He is experiencing family problems and feels  isolated in his new faith. His wife left him and is asking for a divorce. When a VOM worker told him we would be praying for him on July 1, he was amazed. Pray that he grows in his faith. Pray that he will be reconciled with his wife. Pray for more community for him. And pray for the many more brothers and sisters like him in the Middle East, along with the workers who are reaching them for Christ.

Rashid’s testimony is below, told by our worker in the region. 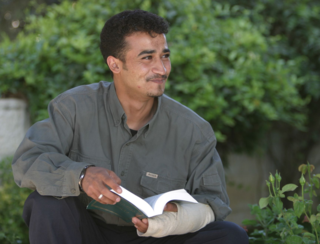 Khalid Saad, another Jordanian convert to Christianity, was shot at and had his arm run over by a taxi in retaliation for leaving Islam.
Rashid’s story begins with curiosity and thirst, like many other Muslims in Jordan and across the Arab world. He was curious, but had many questions and simply needed a person willing to take the risk and the time to share with him. One day, Rashid met a Christian man who was willing to open up to him about his Christian faith and answer some questions. They talked for hours, discussing Islam and Christianity, but there were some questions the Christian was unable to answer due to his lack of knowledge of Islam, so he referred Rashid to some others to answer his questions.

I and two other people met with Rashid in January 2012 for the first time. We talked for two and a half hours and answered all of his questions. His two main questions were 1) the reason for the cross and 2) the language the Bible uses in Song of Solomon.

I explained the Gospel: that all humans are sinners by nature. I explained the necessity of the cross and the crucifixion of Jesus and that without the cross and death of Christ, we are left in our sin and unable to stand before a holy God. I showed him how Jesus is the only one able to meet the requirements of the justice of God.

To help you understand his second question, Muslims often misperceive Song of Solomon and the description of a woman’s body parts, which in Islam are considered to be shameful. In order to clarify this misperception, as believers, we have to explain what the Bible teaches about women overall.

We showed him that women are not described as sexual beings in the Bible, but that they are to be loved, honored and respected. I asked Rashid, “Why is it shameful for the Bible to mention the body parts of women, but not men? The answer is simply because Islam has been teaching you to see women in a sexual context only. So, before reading Song of Solomon, you need to understand and see women in the right way, which the Bible teaches.”

We continued meeting with Rashid and building our friendship. Once, after a long conversation about the faith, Rashid asked me, “If I want to pray to God — your God, not the god of Islam — what should I tell him?” That was a shocking statement! Rashid was able to recognize that the God of Christianity is different from the god of Islam.

We continued to meet with Rashid for months, watching him struggle between the new discovery of the cross of Christ and the faith of Islam that he had always known. In the midst of this constant struggle, I gave Rashid a Bible and a commentary to be able to read and dive deeper into the Christian faith.

In December 2012, Rashid called and asked me to meet him. He told me about the challenges he faced in becoming a follower of Jesus and all the persecution from the government he could face when they found out about his conversion. He thought that for his conversion to be official, he had to go to the government office and ask for his religious status to be changed.

I explained that God does not require permission from the government for someone to be his child, but that he only needed to acknowledge his sin and believe in God's son as the savior from his sins. After this, God would do all the changes inside his heart, through his faith in Christ. Rashid was amazed at this answer.

A week later, Rashid decided to pray to be saved through the blood of Jesus. This is what he prayed:

“God, thank you for your love for me. [Silence for two minutes.] I testify that there is no god but God and Jesus is the son of God.”

Usually, Muslims say this sentence to confess their faith in Islam, but instead of saying Jesus is the son of God, they say, “Muhammad is the prophet of God.” Rashid knew this sentence and had said it for years as a Muslim, so he modified it.

Rashid now considers himself a follower of Jesus and has decided to live his life for Christ despite probably persecution.

...that is Great, Rashid will witness and will help many others understand how good becoming a Christian is. I pray that, evengelization is empowered in places like where Jordan.

this is my last comment in persecutionblog.com (because useless i comments and you delete my comments) :

very happy know some new convert to Christians, hope new Christians will not convert to other religions anymore, very sad knew some Christians are convert to other religions, how you begin is less important than how you end is more important, are you still live in JESUS no matter what where when from the beginning until the ending from forever until forever are you still live in JESUS ??? many Christians not understand Bible and many Christians not live according to the Will of GOD and some Christians are still doing sin !!! repent repent repent before too late !!! the judgement of GOD is coming soon !!!