Persecution Blog: Is There Any Good News?

Is There Any Good News?

I remember the day I first learned about the magnitude of evil at work in this world. I was about 8 when the lady across the street, the mother of three of my friends, tried to commit suicide. She was a Jewish survivor of the Holocaust and had seen her entire family die in a concentration camp. My mother later told me the neighbor was watching a TV show about the Nuremberg Trials and had a flashback. Her 5-year-old daughter walked home from kindergarten that day after her mother didn’t pick her up. The little girl found her mother on the kitchen floor and ran to get the neighbor. Medics were able to save her life.

That's how I learned about the Holocaust. I couldn't imagine anything so awful. I couldn’t understand how that much evil could exist in the world and how so many people could allow it to happen. My mother told me evil people have always existed, and that's why my daddy and so many other men went to war — to try and fight that evil. She also told me that no matter how much evil exists in the world, God is always at work protecting us. If God could use a little 5-year-old girl to save her mother's life, he could use each of us.

That night after I went to bed, I thought about what my mother had said, and I told God that I hoped he could figure out a way to use me. One of the reasons I became a journalist is because I believe that if people know about the evil going on around them, they will try to stop it. I really do believe that. 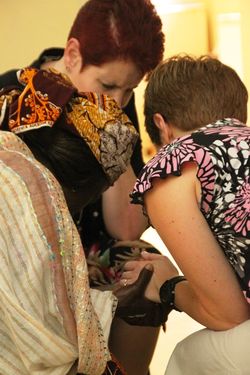 I am in wrapping up the fourth week of my volunteer internship with The Voice of the Martyrs’ communications department. When my friends back home have inquired about VOM and the work I am doing here, I have described VOM’s mission of serving the persecuted church in more than 50 countries.

Then, many of my friends grow silent. Accounts of arrests, beatings, torture and killings are not pleasant to hear. One friend commented, “I don’t think I would want a job where all I did every day was relay bad news.” It is similar to the reaction I have gotten from many over the years when they learn I am a journalist. “I don’t even read or listen to the news anymore,” people often tell me. “It’s too depressing.  Everywhere you turn there is only sadness and tragedy.”

It is true there is much “bad news” in the world. But I believe there is also “good news,” the gospel of Jesus Christ. Perhaps it is only when we allow ourselves to learn about the wicked nature of human beings that we can begin to grasp God’s incredible gift of salvation.

Today, volunteering for VOM, I read and edit stories about people fighting evil every day. As heartbreaking as some of those stories are, it still amazes me how God is at work in the world. He never gives up on us. It has been a privilege for me this summer to help tell his stories of redemption.

Linn Ann Huntington is a journalism professor at Fort Hays State University in Hays, Kansas. A former newspaper reporter, editor and columnist, she likes to spend her summers “having adventures.” This summer, she is doing a six-week volunteer internship at The Voice of the Martyrs, one of her best adventures to date.

I can imagine that this is one of your best adventures yet, Linn. I thank the Lord Jesus you are willing to truly see what is going on in the world and want to help us see it also. It is difficult and heartbreaking when we come face-to-face with the depths of depravity that exist in this world. But we don't grieve as those who have no hope! I agree, the Good News triumphs and helping to carry the burden of those in pain and those undergoing persecution is the VERY LEAST I can do. Many people in my country have not endured persecution - so it can be very easy to turn a blind eye and not want to know what is happening all over the world at this very moment. Because to know means that we are without excuse. We can no longer claim ignorance of the realities. Lord, please help us to be willing to internalize what is going on all over the world and to take action as You direct so that Your will is accomplished. Make us so uncomfortable that we repent and begin to truly follow You. Encourage and strengthen our brothers and sisters across the world as they faithfully stand their ground for Your sake.

Thank you for your work. It inspires me and my family. As soon as we get an email or Facebook status from VOM we pray. Me and my 3kids 12,11,7 gather in a circle and pray for wherever there is need. If it weren't for people like you serving The Lord we would not know how to help. Thank you brother in Christ.