« MOVING TOWARD MUSLIMS: Beyond Sports and Weather | Main | This Thing Called Peace »

“The Church…as the bearer of the gospel…is at variance with…all human cultures without exception.” —Lesslie Newbigin 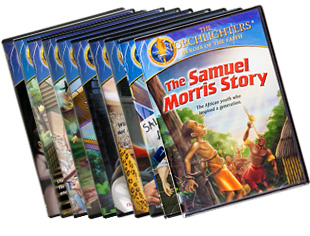 If we believe that all human cultures are at variance with the Church (see the quote above), isn’t it our responsibility to teach our children that others will not always be pleased with their choice to follow Jesus?

The stories of the heroes listed above, along with Perpetua, John Bunyan, Jim Elliot, William Tyndale and William Booth are told on VOM’s Torchlighters DVDs. They provide positive examples of Christians who lived at variance with the culture around them.

The DVDs include 30-minute animated features for kids, longer documentaries that are interesting and informative for adults as well as children, and English and Spanish audio and subtitles.

VOM is currently offering a10-DVD-set of the Torchlighters stories at a special price. Free supplementary materials are available on the DVDs or at www.kidsofcourage.com.

VOM’s Kids of Courage resources help parents and educators teach children ages 5 to 13 about persecuted Christians around the world, and provide opportunities for children to serve and pray for them.