Persecution Blog: Vietnam: "I am faithful to the Lord"

« Extreme Letter | Main | Bonhoeffer: Only at the Hour that God Has Chosen »

Vietnam: "I am faithful to the Lord"

She’s totally alone in the world, orphaned as a young girl, her three children grown and out of the house, and now her husband is five years into a 10-year prison sentence. Because she was orphaned, “Cam” was forced to live with another family, whom she served as a live-in maid. She was never educated, and she can’t read or write. She is 49 years old.

Cam and her husband are members of a Vietnamese minority tribal group living in the Central Highlands. In 2002, they were simple sustenance farmers loosely following their traditional religion. They knew of Christians, and had seen the goodness in their lives. So when someone came to them and told them Jesus had died for their sins and invited them to follow him, they did. They wanted the good life they had seen in others. 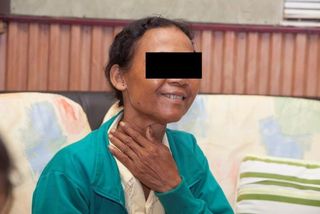 In Dec. 2002, Cam’s husband was arrested in a large sweep of government arrests. They were targeting tribal minority Christians who had been asking for more religious freedom. He was sentenced to six and a half years in prison. After he was released in 2008, he was out for just a few months before he was re-arrested and sentenced to 10 more years in prison.

I don’t know why God chose to allow me, and you, to live in this country of opportunity, and didn’t choose someone like Cam. A VOM reader recently wrote to us, “I see a lot of American Christians engaging their time in foolishness, in worldliness, trying to fit into the world, when we are supposed to be “set apart” for our master’s use. I don’t want to be part of that. My faith has really been challenged by reading your newsletter … – I know I could never do that by myself, but that we have a faithful God who loves us, who will help us get through it and never leave us.”

In her simplicity, Cam also knows that it’s only God that has gotten her through many hard years. She can’t read, but her favorite Bible stories are from the gospels. She likes the story of Jesus carrying the cross – because she loves the Christ who carries her burden with her.

She told me, “Even though I don’t like having a husband in prison, I am faithful to the Lord. You have freedom [in your country], you should be faithful more.”

Dory P. has worked with VOM for six years. She grew up in Ecuador, met her husband while working with another mission organization, and now lives in Oklahoma. Between Dory, her husband and their two-year-old son, they share five passports. Dory helps tell the stories of the persecuted through VOM's newsletter, and her husband serves with VOM's international department.

GOD is THE UP THE RICH THE HIGH .

THE UP look the down .
the down look THE UP .

THE RICH look the poor .
the poor look THE RICH .

THE HIGH look the low .
the low look THE HIGH .

human the down the poor the low .