Persecution Blog: Bonhoeffer: Only at the Hour that God Has Chosen

« Vietnam: "I am faithful to the Lord" | Main | Deadline for Free DVD Extended »

Bonhoeffer: Only at the Hour that God Has Chosen

The following is excerpted from a letter written by German pastor and theologian Dietrich Bonhoeffer and circulated to a hundred or so of his former students during World War II:

...To be sure, God shall call you, and us, only at the hour that God has chosen. Until that hour, which lies in God’s hand alone, we shall all be protected even in greatest danger, and from our gratitude for such protection ever new readiness surely arises for the final call. 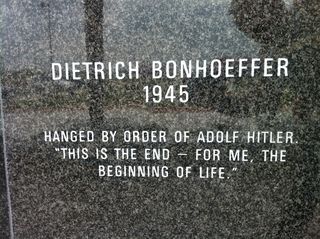 Bonhoeffer is honored on The Martyrs Wall at VOM headquarters in Bartlesville, Oklahoma.
Who can comprehend how those whom God takes so early are chosen? Does not the early death of young Christians always appear to us as if God were plundering his own best instruments in a time in which they are most needed? Yet the Lord makes no mistakes. Might God need our brothers for some hidden service on our behalf in the heavenly world? We should put an end to our human thoughts, which always wish to know more than they can, and cling to that which is certain. Whomever God calls home is someone God has loved. “For their souls were pleasing to the Lord, therefore he took them quickly from the midst of wickedness” (Wisdom of Solomon 4.)

...Death reveals that the world is not as it should be but that it stands in need of redemption. Christ alone is the conquering of death.

...Only in the cross and resurrection of Jesus Christ has death been drawn into God’s power, and it must now serve God’s own aims. It is not some fatalistic surrender but rather a living faith in Jesus Christ, who died and rose for us, that is able to cope profoundly with death.

In life with Jesus Christ, death as a general fate approaching us from without is confronted by death from within, one’s own death, the free death of daily dying with Jesus Christ. Those who live with Christ die daily to their own will. Christ in us gives us over to death so that he can live within us. Thus our inner ding grows to meet that death from without.  Christians receive their own death in this way and in this way our physical death very truly becomes not the end but rather the fulfillment of our life with Jesus Christ. Here we enter into community with the One who at his own death was able to say, “It is finished.”

Dietrich Bonhoeffer’s life on earth ended when he was hanged in Flossenburg Concentration Camp on April 9, 1945. To learn more about his life, ministry and death, read BONHOEFFER: Pastor, Martyr, Prophet, Spy by Eric Metaxas.

Posted by The Voice of the Martyrs on May 13, 2013 at 01:30 PM in Devotional, Grace Gems, persecution quotable, saints and martyrs | Permalink

the chosen people of GOD

the chosen times of GOD

the chosen saved by GOD