Persecution Blog: “Your cause is Christ’s gospel”

“Your cause is Christ’s gospel”

But such letters are not new. In 1533, as John Frith awaited his execution in the infamous Tower of London, he received two letters from a close friend. The letters encouraged Frith to fight the good fight while cautioning that his writings should not cause dissention within the young Protestant movement. 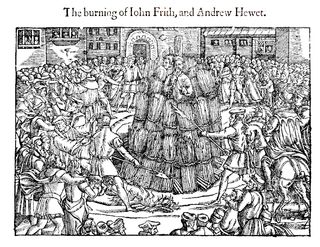 Frith was part of the Reformation then sweeping Europe that challenged the Church's traditions and some of its doctrine. Among many points of contention, the Reformers opposed teachings that emphasized works-based salvation rather than the gospel's truth that man is saved by grace through faith in Christ.

Many Reformers had already paid the ultimate price for the bold stand that Frith was taking against the Church. He disagreed with the Church's views on Communion and hell, and for this he was sentenced to die as a "heretic."

Frith's close friend, William Tyndale, was also a hunted man because of his translation of the New Testament into English. At that time, the Church didn't think common people should read the Bible in their own language.

Tyndale, perhaps worried that his friend had become discouraged while awaiting his execution, wrote the following in his second letter to him:

Your cause is Christ's gospel, a light that must be fed with the blood of faith. The lamp must be dressed and snuffed daily, and that oil poured in every evening and morning, that the light go not out. Though we be sinners, yet is the cause right. If when we be buffeted for well doing, we suffer patiently and endure, that is acceptable to God; for to that end we are called. For Christ also suffered for us, leaving us an example, that we should follow his steps… For we suffer with him, that we may also be glorified with him; who shall change our vile body, that it may be fashioned like unto his glorious body; according to the working whereby he is able even to subject all things unto him.

Whether Frith's faith had been wavering is not known, and some question whether he even received Tyndale's second letter. What is known is that he was betrayed by a sympathizer, offered a pardon if he would renounce his views—he refused—and burned at the stake on July 4, 1533. He was 30 years old.

His friend William Tyndale, also betrayed by a friend, was arrested a few years later and burned at the stake.

I am sorry that you must be imprisoned and persecuted, but great is your reward for being faithful to Jesus.

"Greater love has no one than this, that one lay down his life for his friends."