Persecution Blog: The Boy Who Brought the Gospel to Cannibals

The Boy Who Brought the Gospel to Cannibals 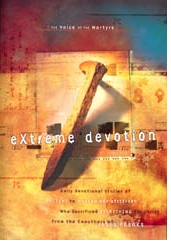 “I wonder if there is a boy here who will . . . bring the gospel to the cannibals?” challenged a missionary in a letter to young James Chalmers’s church. James resolved to be that boy.

In 1866, Chalmers and his young wife sailed for the Southern Seas and were shipwrecked on Rarotonga, where they settled. Eleven years later, they left for Papua New Guinea, and were warmly received into a cannibal village called Suau.

Chalmers began journeying up and down the coast. At one of his stops, the natives surrounded him and demanded tomahawks and knives. Otherwise, they would kill him and his wife. Chalmers stood his ground, and the natives respected his tenacity. They even apologized the following day and soon became friends.

In 1879, his wife died. James was devastated and told a friend, “Let me bury my sorrow in work for Christ.”

Chalmers returned to England twice on furlough, only to be further convinced of his calling. “I cannotrest with so many thousands of savages without knowledge of God near us.”

On April 7, 1901, Chalmers, Oliver Tompkins, and a group of assistants sailed to the island of Goaribari. The following morning he and Tompkins went ashore and were escorted to a large building. Once inside, the natives killed the men and cooked them that same day.

How depressing. Understandably, when we read the stories of martyrs like James Chalmers, our natural reaction may be one of sympathy, and sorrow, and even shame. What a waste. But, we must take a closer look at their stories. Chalmers gave his single earthly life in order to share eternal life with many others. Chalmers did not consider his martyrdom a foolish mistake. Why should we be discouraged? When our earthly sufferings bring the glory and honor of heaven one step closer to the lost, nothing is in vain. Suffering becomes an inextricable part of God’s plan . . . for you and for others. Are you willing to endure earthly pain in order to bring heaven’s opportunity to others?

Posted by The Voice of the Martyrs on December 26, 2012 at 09:54 AM in Christian Persecution, Extreme Devotion | Permalink