“Children get down!” Anne Hutchinson screamed as she heard the arrow sharply strike her door. Then they heard the harrowing screams of the Indians who surrounded her home. More arrows seemed to come from everywhere, and she could hear footsteps near the window. “I will see you today, Lord!” Anne said.

Anne Hutchinson was a woman of courage. By the time she was twenty-three years old, she had been imprisoned three times for speaking out about her Puritan beliefs. The Puritans wanted to hear about the Bible in their church services because few Christians in England had a Bible in the English language. 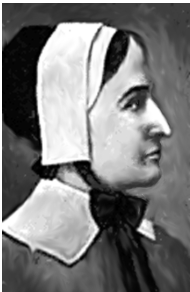 Anne and her husband, William, had come to America in 1634 seeking religious freedom, but even in America, they had been met with persecution for holding religious meetings in their home. People who supported their ministry had been arrested and had even lost their right to vote.

At forty-six years old and pregnant with her eighteenth child, Anne was convicted and imprisoned for four months. After being banished from the colony, her family and friends started a new town and home church in Rhode Island.

With her pioneering spirit, Anne Hutchinson helped make the idea of freedom in worship an American ideal. She and five children died at the hands of her Indian attackers. She met her Savior with courage and faith, just as she had lived her life.

Freedom is never free. It always comes with a cost. Jesus Christ was the first to pay the ultimate price for religious freedom—giving us access to God through his death on the cross. He was the only one who could pay the price for our liberty from sin. His death and resurrection established true liberty, and many believers have since sacrificed to uphold everyone’s right to experience freedom in Christ. Believers like Anne have made the dream of religious freedom a reality in America. Our heritage of sacrifice is huge. What price are you willing to pay for the next generation to experience the religious freedoms that you enjoy? Ask God to show you how to pass it on to the next generation.