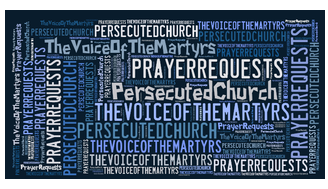 This week we have some new prayer requests for you to pray over.  Thank you so much for being so faithful in your prayers for the persecuted church.  Your prayers really are a ministry.

Thank you for sharing these requests with your likeminded praying friends.  Blessings!

The latest seminary class for a group of North African pastors has been delayed because of unrest in the region. A VOM partner reports that the students involved are very eager to continue their studies. In the meantime, they continue to study God’s Word and prepare themselves for leadership in their local churches. Because of government restrictions, all churches in this region must meet in secret. “We feel confident that classes will resume in the very near future,” a VOM partner said. “Please make this an urgent matter for prayer.” Pray that the class will be able to resume soon and that the work of these ministers will bear much fruit in this region.

Uzbekistan is seeking to extradite a refugee from Kazakhstan on charges that carry a maximum 15-year jail term. Pastor Makset Djabbarbergenov, who fled to Kazakhstan and was recognized as a refugee by the United Nations High Commissioner for Refugees, has been charged with exercising freedom of religion or belief in his hometown of Nukus. On Oct. 15, a court in Almaty, Kazakhstan, authorized detention until Nov. 5 and claimed the Uzbek charges could be equated to terrorism-related charges under Kazakh law. The Supreme Court claims it cannot find an appeal that Makset filed in August. Please pray that Makset will not be deported. Pray that the Lord will give Makset and his wife the strength to remain faithful.

Christians in Eritrea are alarmed by an increase in Christian arrests and by the fact that the government appears to be arming citizens for unknown reasons. Authorities have continued to arrest Christians throughout Eritrea, holding them for several months before releasing them. The most recent arrests have occurred on the outskirts of the capital, Asmara. In addition, the government is arming citizens between the ages of 18 and 70 with AK-47 rifles. “The latest report I have from Asmara is that now, for a few hours every day, everyone is taking some kind of a basic training [with the weapons],” wrote a VOM contact. “There is rumored speculation [that the distribution of arms] started when the late Ethiopian prime minister was sick; there is a tense fear that the new Ethiopian political situation might trigger another conflict. [The other possible explanation is that] as usual it is a diversion that the government creates to occupy its citizens,” the contact said. Pray for God’s protection of Christians in Eritrea and for stability and political reform in the country.

Pray for families in need of emergency funds for court fines and fees. The relief will go to persecuted families in remote house churches who have urgent needs. Pray also for the workers involved in delivering the funds.

The International Day of Prayer for the Persecuted Church (IDOP) is on November 11, 2012. Will you pray for your brothers and sisters in Christ? Visit http://www.persecution.com/idop to learn more.