Persecution Blog: View from the Altar – Bomb Blast at Church in Nigeria

View from the Altar – Bomb Blast at Church in Nigeria

The following news is used with the permission of Morning Star News.  Please continue to pray for Christians in Nigeria.  As you know, the persecution happening there seems to be unending and it's intensity and has impacted thousands of Nigerian Christians.  Pray for their protection and safety.  Please also pray for the members of Boko Haram and others who are persecuting them. 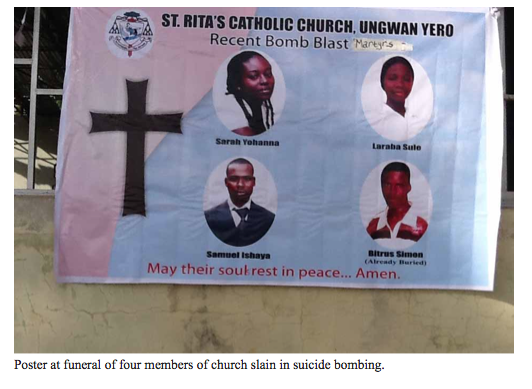 Burned on his head and mouth, the priest of St. Rita’s Catholic Church in the Malali area of this northern Nigerian city had lost the vision in his left eye only temporarily; the blast blinded two church members permanently, he said.

“At about 8:45 a.m., while I was at the altar tabernacle in preparation for ministering the Holy Communion, I heard a sound of a blast outside – as my attention drifted to that area, I saw through one of the windows that the [perimeter] walls of the church premises were crumbling,” he said. “I called the attention of the choir members sitting close to that part of the church to what was happening outside, and within a twinkle of the eye, the sound became more louder. At that moment, the walls of the church building came down, crushing all those seated around the choir and children’s sections.”

The impact of the explosion from an explosives-laden car driven by a suspected Islamic extremist left him with little memory of the next few minutes.

“I only realized a few minutes afterwards that my left eye was blinded by the blast. I was bleeding profusely and there was commotion, pandemonium, and stampeding all over the church. I could hear cries all around me, and some were shouting, ‘Where is the priest?’”

Unaware of the burns on his mouth, Bazza could not understand why he was unable to speak, he said.

“I thought the left part of my body was blown off, and I could no longer talk,” he said. “I remember being helped by some church members who used their clothing to clean the blood on my face and moved me and others to the hospital. Even though I could not speak, I was conscious enough to ask for a paper and then write, giving instructions on what should be done for me in the hospital.”

Four of those killed – Laraba Sule, Sarah Yohanna, Bitrus Simon and Samuel Ishaya – were members of the church in the Ungwan Yero neighborhood of Malali, he said; the others slain were visitors. Simon was buried in his home state of Kebbi, while the other three were interred after a funeral ceremony at the church attended by hundreds yesterday (Nov. 8), he said.

The National Emergency Management Agency reported that seven people died in bombing, not including assailant. Bazza said more than 250 people were injured, though only 134 were church members. Eight of those wounded were critically injured, the priest said.

“One of them, Miss Blessing, cannot talk up to this moment,” he said. “Another of the injured, a Mr. John, had two of his eyes blown off by the blast. Another of our members again, whose name I do not have at the moment, also had his eyes blown off too. In fact, we had to spend about 91,000 Naira [US$570] just for tests alone on him at the ABU Teaching Hospital in Shika near the city of Zaria.”

The bombed church building was filled to overflowing at the funeral service yesterday. The Most Rev. Matthew Man-Oso Ndagoso, archbishop of Kaduna, described those killed in the blast as the martyrs.

He prayed for the transformation of the terrorists who carried out the attack, suspected members of the Islamic extremist group Boko Haram, which seeks to impose sharia (Islamic law) throughout Nigeria.

“It is our prayer that these terrorists will be changed by God and their evil intentions put to naught,” Ndagoso said.

The population of the Archdiocese of Kaduna was reportedly only 9.2 percent Catholic in 2011. Christians make up 51.3 percent of Nigeria’s population of 158.2 million and live mainly in the south, while Muslims account for 45 percent and live mainly in the north. But those practicing indigenous religions may be as high as 10 percent of the total population, according to Operation World, so the percentages of Christians and Muslims may be less.

In a sermon that lasted almost an hour, the archbishop urged Christians in northern Nigeria to forgive the perpetrators of the violence in spite of the pain of losing loved ones.

“Only then,” he said, “will there be true reconciliation and the witness of the gospel to enemies of the Christian faith.”

Grave on church premises for one of the slain.

Posted by The Voice of the Martyrs on November 09, 2012 at 05:08 PM in Christian Persecution, Nigeria | Permalink