« Persecution Podcast #137: Philippines, Iran, Indonesia, and Vietnam | Main | Sebastian Stood for Christ Until He Was Martyred » 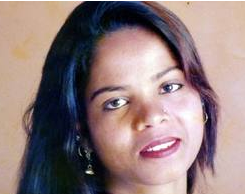 As you all know, we cover Christian persecution and the horrible things that happen to Christians all over the world.  In recent days we've covered numerous stories about women who have been persecuted in Pakistan, including Asia Bibi and Rimsha Masih.

Today there is a great article over at AFP.ForeignPolicy.com which highlights some of the horrific things that have happened in Pakistan.

Two of the women highlighted in their top ten list are Asia Bibi and Rimsha Masih.

Here's what they say about Asia and Rimsha:

Ramsha Masi is a teenaged Pakistani Christian girl, who according to some reports suffers from Down syndrome, and who was detained by authorities in Islamabad on blasphemy charges in August 2012 for allegedly burning pages of the Quran. She could face the death sentence if charges against her are proven. Ramsha's case spotlighted the vulnerability of Pakistan's religious minorities, who can easily be subjugated by Muslim clergymen under the controversial blasphemy law. It turned out that a Muslim cleric had actually planted evidence against the Christian girl but he was eventually granted bail by a court. Ramsha's physical safety still remains a major concern.

Asia Bibi is another Christian woman who became a victim of the blasphemy law. In November 2010, a court in Punjab handed her a death sentence for committing blasphemy against Islam. If the superior courts uphold the judgment, she will become Pakistan's first woman to be killed under the blasphemy law.

Ms. Bibi's case also indicates the improbability of abolishing or reforming the blasphemy laws. For example, Salmaan Taseer, the Punjab governor, was shot dead by his own security guard when he publicly spoke in support of Asia Bibi and proposed a review of the draconian law.  His killing was immediately followed by another high-profile murder of the minister for minority affairs, Shahbaz Bhatti. The killings in the wake of Asia Bibi case have nearly silenced the debate over scraping the discriminatory blasphemy law.

You can read the full top ten list and the whole article here.