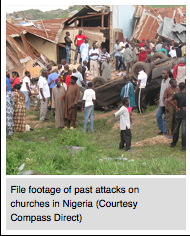 Nigeria (MNN) ― A bomb blast and gunfire shook an area around a seminary in northern Nigeria on Sunday, leaving two dead.

It was not immediately clear who was behind the blast in the city of Zaria, but extremist group Boko Haram has been blamed for hundreds of deaths as part of its insurgency in northern and central Nigeria.

Investigators said the blast was the result of an improvised explosive device. The targeted area included the school as well as the worship center.

Sound like a familiar story? In this case, it involved the Salafi, students who are studying Sunni Islam. Todd Nettleton, spokesman for Voice of the Martyrs USA, explains what this might mean. "I think it goes to show the nature of Boko Haram, that they have a very narrow vision of what Islam is and what it should be, and they want all Nigerians to fall within that very narrow vision." Nettleton goes on to say that reports indicated "the Salafist cleric who runs this Islamic boarding school has been at odds with Boko Haram in the past. It seems like that is a strong possibility of a Boko Haram attack in Nigeria."

The violence came a day ahead of commemorations marking 52 years of Nigerian independence. However, says Nettleton, "They celebrate independence, but I think there's a real threat to their independence that is growing in northern Nigeria among Boko Haram."

Nigeria's north has been hit by scores of deadly attacks attributed to Boko Haram. In the last two years, their rebellion has cost 1,400 people their lives.

While Boko Haram has claimed to be fighting for the creation of a state in Nigeria's north, Nettleton warns: don't be fooled. "They talk about wanting an independent state that would be run according to their vision of what true Islam is, but their demands have changed over time, as well."

The lines have gotten muddied on what Boko Haram actually wants. The name of the group is generally translated as "Western education is sinful," but in Hausa it literally means "book forbidden." The founders of the group believed Islam had been corrupted by Westernization, especially education and Christianity. They also rejected the legitimacy of the state and of Muslim traditional rulers.

What they wanted, explains Nettleton, was a Sharia state governed by orthodoxy. "Obviously, Christians fall outside of that. We've seen attacks on churches, we've seen attacks on Christian institutions, but this shows that even if they [Boko Haram] think fellow Muslims are outside of what they call the ‘true teaching of Islam,' they will attack them as well."

The battle for Nigeria's soul intensifies. While Islamic terrorists rely on weapons and fear, Nettleton says Christians need to trust in God's love and eternal promises. That's also one of the challenges for the church in Northern Nigeria: the issue of fear. "Just imagine when you wake up Sunday morning and are deciding, ‘Should we go to church or not?' If you add in the threat that ‘maybe our church will be bombed while we're there this morning,' you imagine the sense of fear and the sense of concern that that would raise."

That's what standing in solidarity would mean, Nettleton adds. "We can pray with them against that spirit of fear, and against that spirit of intimidation. I think the second issue then becomes: 'How are we going to respond to those who attack us? How are we going to respond to the Muslims around us?' There is obviously a place for evangelism; there's a place for sharing."

The bigger issue is how to respond to the violence of the insurgents and "the issue of forgiveness, the issue of loving those who society would say are our enemies. That's a difficult thing, and that's another thing that we can pray for our Nigerian brothers and sisters, for them to be able to do that with God's help."

Ask God to protect them and help them as they seek to respond in love and prayer for their Muslim attackers. Pray for the attackers, that God's mercy and grace might pierce through the hardness of these hearts so opposed to His name. Ask God to send peace to Nigeria.