Coptic Christians remember the anniversary of the Maspero Massacre 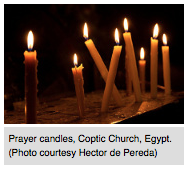 Today, groups like the Maspero Youth Union hope to march peacefully and call for the prosecution of high-ranking generals who were in power at the time of the massacre.

The bloody anniversary was met by days of prayer and fasting and a pre-service last week at St. Mark's Cathedral in Abbaseya. There, Christians commemorated the 28 protesters who died October 9, 2011 in a clash with the military. The names of all the victims were read aloud as people in the cathedral bowed their heads in respect.

Open Doors reports that during the vigil, Metropolitan Pachomius of Beheira--the Church's interim leader--said, "We meet today to remember our children who have died and walked in faith."

He reminded the congregants of other incidents involving the deaths of innocent Christians.
"We remember them with our loved ones in Kosheh, Samalout, Imbaba, Al-Amraneya, and Nag Hammadi," adding, "They are martyrs of the era, and we cannot forget them. We live in a new era of martyrdom."

Pachomius was referencing the events of Oct 9, 2011. On that day, thousands of peaceful protestors--mostly Coptic Christians--were marching to protest the destruction of St. George's Church in Marinab, Aswan (southern Egypt). When they were near the Maspero building--the headquarters of the Egyptian Radio and Television Union, they were met by members of the Supreme Council of the Armed Forces, or SCAF.

Soldiers reportedly attacked demonstrators. Many were injured, some were run over by military armored vehicles, and others were shot dead. Although SCAF conducted an investigation and claimed the army was not at fault, video and witnesses claimed otherwise.

It has been a year, but the grieving families have not forgotten. Marking the first anniversary of the massacre, the Maspero Youth Union in Egypt is marching once more. The Union will also demand the punishment of the ringleaders behind the incident.

The vigil also marks the next phase of the selection of a new pope. The Pope is the voice for the Coptic Church in Egypt. The process has been underway since Pope Shenouda III died in March 2012. Over the next two weeks, the papal committee will narrow the list of 17 candidates down to between five and seven.

In late November, around 2,500 Copts, both clergy and laymen, will vote and bring the final list of candidates down to three. On December 2, the Church will hold a liturgy at the cathedral in Abbaseya in which a blindfolded child will draw the name of the 118th Pope of the Coptic Orthodox Church.

The day has a potential for violence. Pray that believers would be bold in their faith and wise as they navigate the path between mourning their loss and calling for justice.