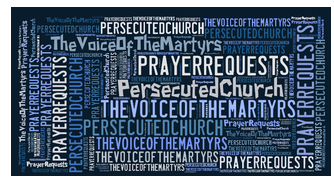 Happy Friday to all of you!  As usual, I have this weeks very important prayer requests to share with you.  Please take a moment to download them and share them with your praying friends.  Click here for the printer friendly version.

In the past year, more Muslim leaders in Sierra Leone have converted to Christianity than ever before, according to a VOM partner. “My heart is overflowing with joy, by taking a brief reflection on what the Lord has accomplished,” he said. Evangelists in the area, all of whom are converts from Islam, have received support and tools that enable them to go farther for ministry and to visit converts more often. They are using motorcycles and bicycles to reach new communities, and they are providing the communities with solar and crank radios that broadcast Christian radio programs. “Most evenings brings a group of new converts together to listen,” the VOM partner said. “The result and outcome of these tools cannot be overemphasized.” Praise God for these new Christian converts in Sierra Leone.

An Uzbek pastor who fled Uzbekistan in 2007 has been arrested in Kazakhstan and faces extradition to his home country on charges of illegally teaching religion and distributing literature. Makset Djabbarbergenov, whose wife is expecting their fifth child, was arrested after police held his sister-in-law for two weeks in an effort to discover his whereabouts. The 32-year-old pastor faces up to three years in prison on each charge. A court in Kazakhstan has ordered that Makset be detained until the General Prosecutor’s Office decides whether to extradite him to Uzbekistan. Please pray that Makset will not be turned over to Uzbek authorities. Pray that his growing family will not be fearful but will continue to trust God.

On Sept. 11, three Laotian pastors and two other Christian leaders were arrested by district police. The three pastors were bound with chains and sent to the Phin distric prison, while the two others were turned over to provincial leaders and released two days later. The three pastors are enduring harsh conditions in prison — all remain in handcuffs and one is in stocks, bound by the ankles. District police have visited the pastors’ homes and churches, asking members where their churches obtain funds, why they became Christians and whom the pastors have led to Christ. All three pastors remain in prison, and two are seriously ill. Pray that God will grant these pastors strength and endurance. Pray that authorities will provide them with needed medical treatment.

Pray for a team of teachers working in a “Mobile Bible School.” The teachers travel across the country in a van, teaching in underground Bible schools.

Posted by The Voice of the Martyrs on September 28, 2012 at 04:40 PM in Christian Persecution, Intercessory Prayer | Permalink