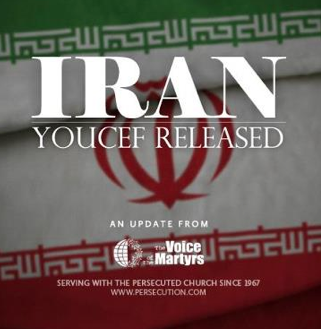 Pastor Youcef Nadarkhani was released from prison on Saturday, Sept. 8, after remaining in custody for nearly three years while fighting apostasy charges and a death sentence. Authorities dropped the apostasy charge and retained only a charge of evangelizing Muslims. For the lesser charge, he was sentenced to three years in prison and given credit for the two years and 11 months already served. With bail accepted for a 30-day early release, Youcef left the prison and was reunited with his wife, Fatemeh, and their two sons.

“Thank you to everyone that has supported me with your prayers,” Youcef told Present Truth Ministries.

The 34-year-old pastor from Rasht, which is about 750 miles northwest of Tehran, was arrested in October 2009 after protesting a government policy that required children, including his 8- and 9-year-old sons, to study the Quran in school. He was later charged with apostasy and evangelism to Muslims. Youcef was tried on Sept. 21–22, 2010, by the First Court of the Revolutionary Tribunal and convicted of apostasy. He was sentenced to death on Nov. 13.

Authorities tried to re-convert Youcef to Islam through a variety of methods, including medication, while he was in Lakan prison. After he repeatedly refused to renounce his Christian faith, his wife was arrested, put on trial without an attorney and sentenced to life in prison. She was later released when an attorney appealed her sentence.

Although acquitted by the courts, Youcef may now face other dangers. Another pastor imprisoned on apostasy charges, Mehdi Dibaj, was abducted and murdered less than two weeks after his release in 1994. Middle East Concern reports that at least 16 other Christians remain in detention because of their activities. Some are serving prison sentences of up to six years because of their faith.

Posted by The Voice of the Martyrs on September 18, 2012 at 05:41 PM in Christian Persecution | Permalink