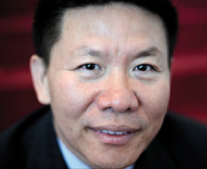 Here's a snip for you:

Activist-pastor Bob Fu once called himself "God's double agent" because he taught English during the day at a Chinese communist school and conducted home Bible studies at night.

But now Fu is based in Midland, Texas, where he heads ChinaAid, which provides legal assistance and support to pastors, political dissidents, and couples resisting China's one-child policy. This new focus brings Chinese and American Christians closer together in common cause. His advocacy against China's brutal one-child policy is proving to be highly effective in drawing believers from both nations into the fight for the unborn as well as for greater religious freedom.

In May and early June, Fu played an influential role in three events that drew global attention to the one-child policy and forced abortion:

• Dissident blind lawyer Chen Guangcheng, whose 2005 research uncovered 130,000 forced abortions in one province in China, fled house arrest in a dramatic nighttime escape to the American Embassy in Beijing. With assistance from Fu and many others, Chen traveled to New York on a student visa.

• Feng Jianmei, a woman from Shaanxi Province, was pregnant without official permission. Authorities arrested her and forced her to undergo a late-term abortion. A photo of her and her dead baby went viral on the Internet. Many pro-life websites, including All Girls Allowed and ChinaAid, drew global attention to the illegal practice of forced late-term abortion.

• Cao Ruyi and her husband Li Fu were expecting a child without official permission. Officials arrested Cao and threatened abortion. The couple contacted ChinaAid, which drew global attention to the couple's plight. This, in part, motivated family-planning officials to back down.