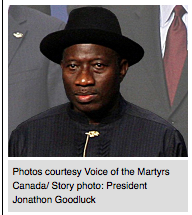 It implies that an unknown subject can be identified by observing habitual characteristics.  In this case, it's the group Boko Haram that has been hard at work spreading its message of 'Western Education is sinful'.

According to the Associated Press, the group is responsible for attacks on schools, churches and police stations.   In the first six months of 2012, they killed well over 600 people and injured thousands more. They've declared a jihad on Christians in the North and are pushing for Sharia law throughout the country by whatever means possible.  Yet, the government does not want them identified as a terror group.

Nigerian government officials are protesting the U.S. State Department listing Boko Haram as a "Foreign Terrorist Organization".   It's a move that "boggles the mind", says Voice of the Martyrs USA spokesman Todd Nettleton. "In June, the State Department designated three of the top Boko Haram leaders as 'Specially Designated Global Terrorists'. So, the three top leaders are terrorists, but the group itself is not a terrorist group? It makes no sense."

There are concerns that such a designation would give the group credibility and embolden them to more attacks.  The government also says Nigerian travelers would be inconvenienced by embarrassing scrutiny, humiliation and harassment.  "It just complicates matters", Nettleton explaining the government rationale,  "because it places restrictions on travel, it places restrictions on aid. So, from the government's perspective, they don't want those restrictions, they don't want those issues to be raised, so they have said 'please don't call them a 'terrorist group'."

Yet, Boko Haram's objectives have been clearly stated.  "This is a group that is trying to make Nigeria into a Sharia state. They want to follow sharia law, they have told the Christians, 'if you want peace in Nigeria, you should become Muslims because Islam is the only religion'."  Their actions, in any other context, would be considered terrorism.

The government's stance on the terror designation sends an odd message to the Christians who have been caught between the desire to avenge loved ones, protect themselves and yet 'turn the other cheek'.   Nettleton notes, "The Nigerian government, while they don't want the world to call them a terrorist group, seems completely incapable of stopping the Boko Haram from these attacks."

Lack of recognition or effective deterrence is fueling more dissatisfaction.   Despite the frequency of the attacks, there's been little attention paid to the plight of the Boko Haram's targets.  Nettleton says in fact,  "The U.S. Government has said 'Poverty has really caused this . it's not a matter of ideology. It's really a matter that the people are poor and they're disenfranchised.  That's why they've blown up your church.' That's not even the reality.  I think there's a frustration that the world doesn't recognize what's going on in Northern Nigeria."

However,  Nettleton says even though the circumstances have created incredible fear among Christians, it hasn't stopped the advance of the Gospel.   VOM has come alongside to provide support as needed, but he says, "Pray for the protection of all of our brothers and sisters there, those  who are doing the Gospel work. I think, secondly, we can pray for fruit. We can pray that they will find receptive hearts, receptive minds and people who really want to know the Truth."