Persecution Blog: Kids of Courage: “I Don’t Hate Those Who Harm Me”

Kids of Courage: “I Don’t Hate Those Who Harm Me” 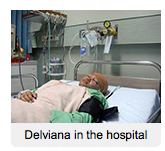 Today I'd like to share with you a wonderful post that is found on our Kids of Courage website.  If you don't read the blog at our Kids of Courage page on a regular basis, I want to encourage you to start.  Please click here to read some of the other posts.

I Don't Hate Those Who Harm Me

Delviana is a Christian teenager in Indonesia. One day last year, she was leaving church with her parents and sister when she stopped to check her cell phone. “Suddenly I heard an explosion,” said Delviana.

The explosion was a bomb. Delviana’s church was one of about 60 churches attacked, burned, or vandalized in the past two years by radical Muslims.

Shrapnel (pieces of the bomb) hit Delviana in the forehead. As her father wiped her face with his shirt, Delviana called out to Jesus to help her. “I felt the Lord Jesus was beside me,” said Delviana. “I didn’t feel any pain. I didn’t even cry.”

Delviana’s father took her to the hospital where she had surgery to remove the shrapnel. “I knew the Lord would never leave me alone,” said Delviana. As she was wheeled into surgery, she sang, “In the name of Jesus there is victory.”

Delviana often had headaches after the surgery, but she returned to church less than two weeks after the bombing. “Whatever my condition, I don’t hate those who harm me,” she said.

None of the church members died in the bombing, but the bomber died. “[I felt] no hatred or revenge in my mind,” said the pastor of the church. “Only love for this bomber who had chosen the wrong path.”

Ask God to protect Indonesian Christians and heal those who have been hurt. Pray that radical Muslims will open their hearts to Jesus, who never leads anyone down a wrong path.