CBNNews posted the following report today concerning the rise of Anti-Semitism and the persecution of Christians in the world.  You may read the full article here. 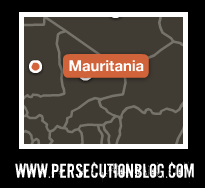 If you're one of the thousands of people who have downloaded our mobile phone apps on either Android or Apple platforms, then you would have read the following for today's prayer request.

Mauritania:  Pray for Pastor "Anwar" and other Christians who are threatened by Muslim extremists.

If you're not familar with the little country of Mauritania, let me share with you that is is a restricted nation and the population is about 99.8% Muslim.  The Christian population is approximately 0.3%.

This small country is also one of the world's poorest countries and also one of the most restricted, as you can see from the tiny population of Christians who reside there.  There is no freedom of religion in Mauritania and the people live under Sharia law.

The saddest part of this little country is that still, after all of these years, that 14 of the 19 people groups have never heard the gospel.

Please join me in praying for Mauritania and her people.  Pray for the Christians who are living there, and also pray that the gospel would reach all of the unsaved Muslims who reside in this country. 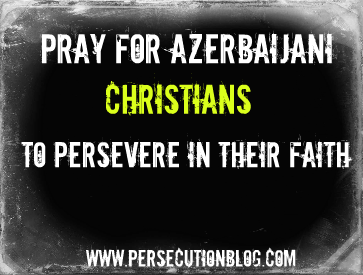 Azerbaijan (MNN) ― The reins are tightening on what is and isn’t allowed to be sold in Azerbaijan—including religious materials.

According to The Voice of the Martyrs, USA's source Forum 18 News Service, all religious materials in Azerbaijan must have a state-issued verification mark in the form of a sticker before they can be sold.

The amendment created a new Article in the Code of Administrative offenses. It says anyone found selling religious products without state verification can face fines and the materials confiscated.

Several religious committee members told Forum 18 that they rarely bring religious literature into Azerbaijan through customs for fear of having them confiscated.

A Tax Ministry spokesperson stated that the amendment was created to make sure all commercial religious literature is getting taxed. Censorship is not required for religious materials and books produced non-commercially.

This amendment adds to the compulsory censorship that religious materials are already subject to by the State Committee for Work with Religious Organizations. Shops selling religious literature have been subject to compulsory licenses since 2009.

The State Committee has the ability to restrict the number of copies which are printed or imported, check shop contents selling religious literature, and keep a list of banned religious materials.

The Expertise Department responsible for that list refuses to make it public.

A member of the Baku-based religious community told Forum 18, “This is just the latest measure to restrict religious activity.”

Pray for Azerbaijani Christians to persevere in their faith and in distributing God’s Word despite added difficulties.

Posted by The Voice of the Martyrs on July 31, 2012 at 06:31 PM in Christian News, Christian Persecution | Permalink

Over the weekend I received an urgent prayer request from our friends over at Gospel for Asia.  The prayer request concerned a pastor who was kidnapped and was in need of prayer for a quick release.  I'm happy to report that a short time later that the pastor was released.  CBN News shares the following report today.

A pastor kidnapped by armed gunmen a week ago in southern India was freed by his captors Monday.

K.P. Yohannan, founder and president of Gospel for Asia, called Pastor Ponnachan George's release "a huge miracle." He credited the work of Indian authorities and the prayers of thousands of supporters.

The kidnappers had threatened to kill the pastor unless a huge ransom was paid. But the missions organization has a policy of non-negotiation.

"These people are known for shooting and killing in cold blood for their cause," Pastor George told Continental News. "I was frightened and really thought I would never be freed. I thought about my wife and young children and felt helpless."

"That is when I began to meditate on the cross of our Lord Jesus Christ," he continued. "And I reminded myself that my leader sent me out with a one-way ticket to this mission field."

"The passage in Acts 20 where Paul says, 'I don't regard my life dear to myself' became a source of strength," he said.

Despite the ordeal, Pastor George said he wants to continue his work in India because "a good shepherd does not leave his flock when the wolf comes."

Posted by The Voice of the Martyrs on July 30, 2012 at 05:26 PM in Christian Action, Christian News, Christian Persecution | Permalink 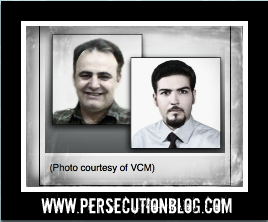 Iran (MNN) ― After several months in prison and solitary confinement, two Iranian Christians have been released from prison.

According to The Voice of the Martyrs, Canada, Noorollah Qabitizse, 48, was recently released after serving 19 months in prison.

Qabitizse was a house church leader arrested in 2010 on Christmas Eve. Authorities raided a celebration gathering in his house church and captured Qabitizse, along with 10 other believers.

Authorities interrogated and tried to force Qabitizse to denounce his faith, causing him to suffer from mental abuse.

While in the Dezful prison, Qabitizse started a Bible study. When authorities got wind of his activities in prison, they transferred him out to Ahwaz as punishment.

The second Christian recently released was 24-year-old Ehsan Behrouz. He was a university student studying management in the University of Mashhad.

After his arrest on October 2011, Behrouz suffered eight months in prison including 105 days in solitary confinement.

Although Behrouz has been released, he hasn’t been able to resume classes, and his education is at stake. Other Christian students in the past have been forcibly deprived of their education.

Please pray for Behrouz to be able to continue his education in peace. Pray that these testimonies of faith in Christ will encourage other believers in Iran to persevere for the Gospel.

Click here to check out The Voice of the Martyrs, Canada’s Persecution and Prayer Alert.

If You Pray, You Get Fed to the Lions 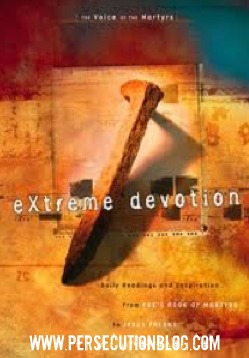 He heard the decree from his window: “For the next thirty days, anyone who prays to anyone other than the king will be thrown to the lions.”

Daniel pushed the shutters open. On the rooftop across the way, two of the king’s advisors who hated him stood, glaring intensely. He nodded cordially as he met their eyes, and they nodded back, as conning smiles spread across their faces.

Daniel went to every window in his chamber and swung it wide open. At each there seemed to be observers. Then he went to the center of the room, where all could see him, knelt, and began worshiping God.

The king was dejected when the guards brought Daniel before him. The king had been tricked. His decree could not be revoked, though he had sought all day to find a way to free Daniel, whom he considered to be a good man.

“Take him,” King Darius said to the guards. Then he looked in Daniel’s eyes and said, “May your God, whom you serve continually, rescue you!” (Daniel 6:16). The soldiers took Daniel to the den, with the king following close behind. Daniel did not say a word, but bowed to the king and walked in among the lions. The doorway was sealed with a large boulder.

Daniel went to the center of the den, knelt, and began worshiping God.

Posted by The Voice of the Martyrs on July 30, 2012 at 04:58 PM in Christian Persecution, Extreme Devotion | Permalink 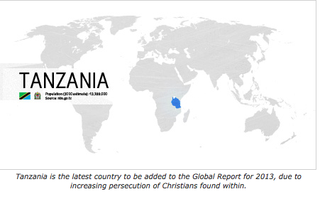 I am happy to share with you that our weekly Persecution podcast is available now for your listening pleasure.

This week we focus on prayer requests for North Korea, Iran, Turkey and Tanzania.

New VOM T-Shirt - I Could Be Caught Dead Wearing This 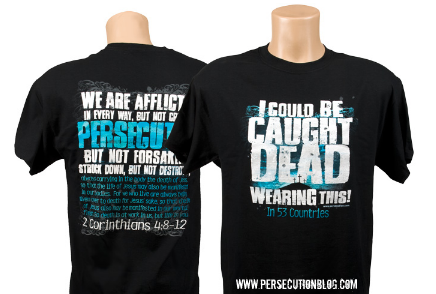 I love all of the Voice of the Martyrs t-shirts that we have in our bookstore and I have to tell you that this new one is totally cool!  Check it out and also keep in mind that it's available in extra big sizes.

Are we willing to be "Caught Dead" living out our faith? Wearing this T-shirt is one way to proclaim your faith boldly and tell others about the persecuted church.

Paul writes in 2 Corinthians 4:8-12 that we always carry the death of the Lord Jesus with us, so his life can be manifested in our bodies. Many of our brothers and sisters risk their lives for the sake of the gospel. Christians in Vietnam and Laos do this every day. Are we willing to do the same?

Tags: Christian, persecution, t-shirt, The Voice of the Martyrs 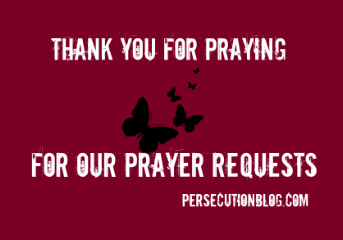 Thank you all for taking the time to pray for these prayer requests.  Please print them up and share them with praying friends and family.  Blessings to you as you stand in the gap for the persecuted.

An Assemblies of God church on Zanzibar island continues to meet for worship and reach out to the community after suffering two attacks this year. In May, a mob of 300 broke into the church and burned musical instruments, chairs and the pulpit. The church’s leader hid in his office, just off the sanctuary, during the attack. Just months earlier, radical Muslims threw a large homemade bomb into the church as 500 believers celebrated the New Year. The bomb did not detonate, but police experts said it could have destroyed the entire building and killed most of those inside if it had exploded. Despite these repeated attacks, the church continues to function effectively and would like to expand its training activities. Pray for the church’s pastor, and pray that the congregation will remain faithful as they endure persecution.

2 Timothy 4:16–18
An Iranian house church leader arrested more than a year and a half ago was released on July 16, 2012. Noorollah Qabitizade, 48, was interrogated repeatedly and spent time in solitary confinement during his imprisonment. Qabitizade was arrested Dec. 24, 2010, along with 10 other Christian converts who had gathered for a Christmas Eve celebration at a home in Dezful. More than 60 Christians were arrested during the 2010 Christmas season. Officials tried to persuade Qabitizade to abandon his Christian faith, subjecting him to continual interrogation and torture. He was asked to sign a document stating that he would stop evangelizing and was asked to write a letter denouncing Christianity, but Qabitizade refused. During his trial in September 2011, he was again given an opportunity to renounce his faith. Thank the Lord that Noorollah Qabitizade was released, and pray for him and his family as he recovers.

Pray for a church that authorities have tried to shut down in a hostile part of Turkey. The church has suffered three firebomb attacks, and the pastor has received death threats. VOM supports the church and its pastor, who evangelizes in the city and surrounding areas.

Posted by The Voice of the Martyrs on July 27, 2012 at 06:06 PM in Christian Persecution, Intercessory Prayer | Permalink 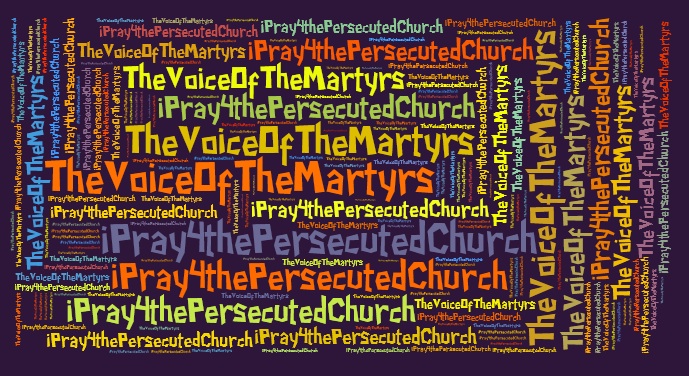