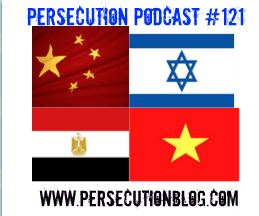 This week in our nine minute podcast, Dory and David share prayer updates for China, Israel, Egypt, and Vietnam.

Please click here to listen to this weeks show! 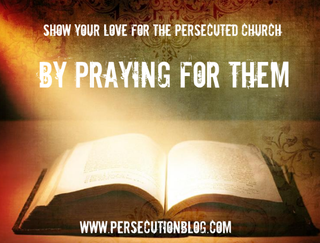 Seventeen Chinese believers were temporarily detained and questioned earlier this month after local officials and police raided a baptismal service at the Bajaihu house church in Niuchang, in western China. More than 20 Christians were celebrating a baptism on the morning of June 7, when police officers raided their service. Officials from the domestic security department held 17 of the Christians for questioning until 7 p.m. The leader of the house church, Wang Lili, was not present during the raid, but officials confiscated her purse, which contained her government ID, her keys, and more than $565. Wang asked police for her purse the next day, but they refused to return it to her. And police required the husband of one detainee to sign a guarantee that his wife would not attend the house church services again. This caused the man, who is not a Christian, to become very angry with his wife. Pray for this woman and the other house church members. Pray that Christians in China will be able to worship as openly as they wish.

Attorneys for Jewish extremist Jack Teitel have proposed a plea agreement wherein Teitel would plead guilty to amended charges that do not include reference to hate crimes, according to recent Israeli news reports. If convicted under the amended charges, Teitel could be sent to a psychiatric facility rather than prison. Teitel has been charged with—and on multiple occasions has admitted to—bombing the home of well-known Messianic pastor David Ortiz, among other crimes. Teitel’s motivation for the bombing was thought to be ridding Israel of those with beliefs different from his own. It took the courts more than two years to determine that Teitel was mentally fit to stand trial. Pastor Ortiz’s son, Ami, was severely injured in the bombing but has made a significant recovery. The Ortiz family has requested prayer for the trial proceedings, that the judge would give appropriate sentences for each of Teitel’s crimes. “We have trained ourselves not to lose hope,” wrote Pastor Ortiz’s wife, Leah. “His Word comforts, supports, guides and gives hope, and his spirit enfolds us in his love.”

The fears of Egyptian Christians were realized on Sunday when Muslim Brotherhood candidate Mohammed Morsi was declared the winner of the presidential election. “I have not slept in three days to follow the results of the election,” wrote Aasim, our VOM worker in Egypt. “He is the worst man to control the country for us as Christians.” Just hours after the polls closed, the military leadership council issued a constitutional declaration limiting the powers of Egypt’s future president. In a previous move to retain control, two weeks ago the council dissolved the parliament, which was dominated by members of the Muslim Brotherhood party. Pledging to be a president for all Egyptians, Morsi has resigned from the Muslim Brotherhood and has promised to include Christians in his government. But Christians remain wary. “We trust that God is also in control and maybe he wants to revive the church in Egypt,” said Aasim. “We are waiting for the Lord.”

Pray for those involved in a project to purchase and distribute digital media players equipped with audio Bibles, Christian movies and Christian audio books. The media players will be given to rural and tribal pastors.

Posted by The Voice of the Martyrs on June 29, 2012 at 05:10 PM in Christian News, Christian Persecution, Intercessory Prayer | Permalink 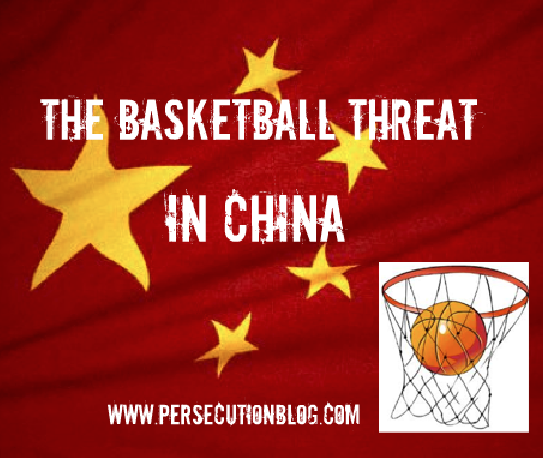 Members of the Shouwang house church continue to face harassment from Beijing authorities. Most recently, security officials denied the church’s student group access to two sports facilities in Beijing. The 1,000-plus members of the Shouwang Church have been meeting outdoors for 14 months, in protest against officials who have prevented them from purchasing or renting facilities for a worship space.

The student group met on Saturday morning, June 16, to play basketball on the campus of the Beijing Institute of Technology, just as they had been for some time. But when they arrived at the court, they were surprised to find it closed. They moved on to the gymnasium at Beijing Normal University, but soon after their arrival that basketball court was also closed. That’s when they noticed they were being followed by security agents.

Since they couldn’t play basketball, the group decided instead to play a kicking game on an open grass space. Almost immediately, campus security guards approached to stop them. They surrounded the Christians and seized a banner they were carrying, which read “Shouwang Youth Fellowship vs. Student Fellowship Basketball Game.” The students resisted and reported the incident to police, but the police simply confiscated the banner.

Eight members of the youth group went to the police station to retrieve the banner, but police refused to return it. Instead, they questioned the young people at length and recorded their answers. The eight were then escorted home by police officers from their respective neighborhood precincts. The final detainee wasn’t able to return home until 11 p.m.

The following morning, Shouwang Church members arrived as usual at their outdoor worship location in Beijing’s Haidian district, and, as usual, several were detained by police for questioning.

Shouwang expects to continue meeting outdoors, even through the hot summer months.

A few days ago, our friends at China Aid, shared a wonderful piece about Bob Fu being honored with an honorary doctorate from Midwest University, as well as a nice write up concerning the event that took place at Midwest University that China Aid Association and the Institute for Faith and Public Policy co-sponsored on Friday (June 22).  The event was titled “Christianity, Culture and the Future of China”.

Please click here to read a great review of the event.  Below is the last part that highlights our friend Dr. Bob Fu from China Aid.

2. China needs to continue to change, to make improvements in human rights and other areas, in order to become a great country, not only a super-power or large country.

3. Two factors are vital to this new transformation: the efforts of citizens in China and international support.

In the afternoon, seminar participants attended Midwest University’s commencement ceremony, during which Pastor Bob Fu was given an honorary doctorate (photo right).

Yesterday we shared with you a story from Compass Direct about to Vietnamese churches being destroyed in Vietnam and today we have a similar story coming out of Sudan.

According to Compass Direct three Catholic schools were confiscated only days after authorities in Sudan demolished two church buildings.  Here's more of the story: 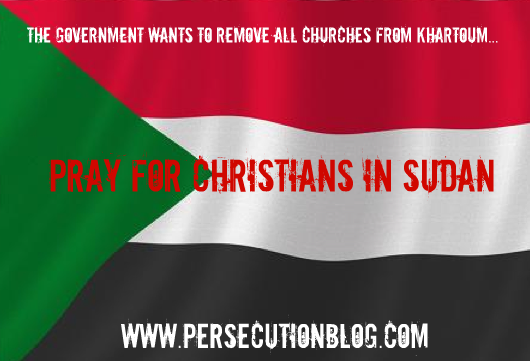 Officials from the Ministry of Planning and Housing of the local government authority on June 18 sent bulldozers that destroyed a church building belonging to the St. John Episcopal Church of Sudan, in the Haj Yousif area, an area source reported by email. A Catholic church building in the area was also demolished the same day.

“The government wants to remove all churches from Khartoum,” the source said. “Tell churches, all churches, to stand on prayer for the church in Sudan.”

Clergymen said persecution was intensifying following the secession of South Sudan in July 2011, with officials targeting churches they claim to be associated with now unwelcome, largely Christian South Sudanese in the Islamic-ruled country.

Full story can be read here.

The Voice of the Martyrs Be-A-Voice-Network has just updated our network with the latest prayer bulletin, which focuses on believers in Malaysia.  Here's hour the bulletin begins: 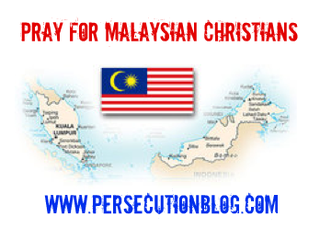 On March 13, 2012, the Johor State Education Department hosted a seminar titled "Strengthening the Faith, the Dangers of Liberalism and Pluralism and the Threat of Christianization towards Muslims. What is the role of teachers?" Two religion teachers from each of the 55 national schools across Johor were required to attend.

Posted by The Voice of the Martyrs on June 28, 2012 at 04:26 PM in Christian Action, Christian News, Christian Persecution, VOM Voice Network | Permalink

Tags: Be A Voice Network, Malaysia, persecution, prayer, The Voice of the Martyrs 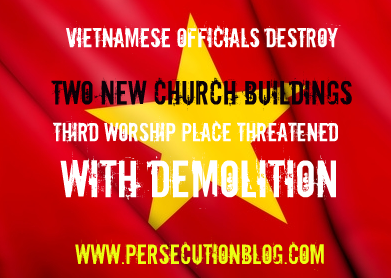 These congregations of 500 to 600 people, which began as house churches, had long outgrown even the largest home, so the Hmong had sacrificed and worked to erect wooden worship buildings. As local police, paramilitary forces and other authorities descended on the church buildings by the dozens, the Christians could only watch with deep sadness and frustration as the houses of worship were reduced to rubble and government promises about freedom of religion were again broken, area sources said.   Full story at Compass Direct.

Ronald Reagan has been quoted as saying, "Trust, but verify".  This is exactly the thought I have as I've been reading the news about Egypt's new President, Mohamed Morsi, who has now reportedly appointed a Christian as his Vice President.

Mission Network News has the story here.   Here's a quote of note:

The Islamist figure, a Muslim Brotherhood leader, promised to ensure rights of minorities. Farid Samir, the Executive Director of *SAT-7's studios in Cairo, says despite the show of good will, "Although most of the promises that he had made are positive, it's not the promises. [Minorities] had fears of being treated as second-class citizens."

In a May 12th speech at Cairo University, Morsi said, "The Koran is our constitution, the Prophet is our leader, jihad is our path, and death in the name of Allah is our goal."

Meanwhile our friends at CBN News have filed two reports concerning the new President and expose what could be the true intentions behind the actions of Morsi.

Watch both video reports below to see more of the story.

Posted by The Voice of the Martyrs on June 27, 2012 at 04:58 PM in Christian Action, Christian News, Christian Persecution | Permalink

Persecution Quotable from a Former Prisoner 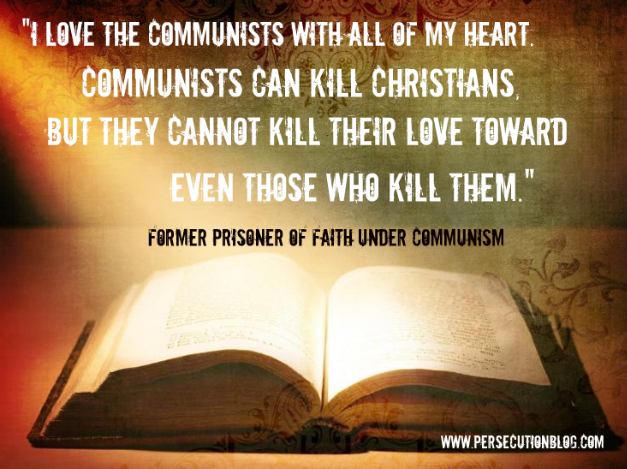 I hope it inspires you to continue to pray for prisoners and to share the love of Christ in whatever circumstance you may find yourself in.

Tags: Communism, persecution quotable, The Voice of the Martyrs

Forced Abortion Victim Being Persecuted by Government, Husband on the Run

The following news is courtesy of our friends at China Aid.  Please pray for this family and for the woman who has lost her irreplacable baby.

Editor’s Note: Earlier this month, the famous Chinese political dissident Huang Qi was the first to expose on his 6-4 Tianwang website the forced abortion case of Feng Jianmei, a peasant from Yuping village, Zeng Family town, Zhenping county, Ankang city in Shaanxi province, who was seven months pregnant at the time. The tragedy of the June 3 abortion forced on her by government workers and the photo of her dead baby, following closely after the Chen Guangcheng incident, once again focused domestic and international attention on China’s one-child policy and its violent enforcement, drawing widespread and angry condemnation.

See our earlier report at http://www.chinaaid.org/2012/06/shaanxi-forced-abortion-tragedy.html

China’s government-controlled media reported that local government officials had been punished for their actions against Feng, in an attempt to portray forced abortion measures as a local problem in the implementation of China’s family planning policy and not the result of central government policies. According to the report below, local officials are wantonly meting out revenge against the couple who has already suffered so much. ChinaAid expresses its shock and condemnation and once again calls on the international community to pay close attention to this case and to help this couple.