Persecution Blog: Why is the Obama Administration and the Media Whitewashing Muslim Persecution of Christians?

Why is the Obama Administration and the Media Whitewashing Muslim Persecution of Christians?

A few days ago I was reading an article that brought some concern to me because I was very surprised to read that the Obama Administration's U.S. Assistant Secretary of State for Africa, Ambassador Johnnie Carson, made some comments about the recent attacks against Christians in Nigeria, and specifically the group Boko Haram, that shocked me.

U.S. Assistant Secretary of State for Africa, Ambassador Johnnie Carson said the following while participating in a forum on U.S. policy toward Nigeria. 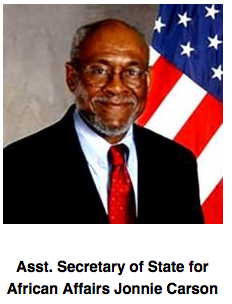 “I want to take this opportunity to stress one key point and that is that religion is not driving extremist violence either in Jos or northern Nigeria,” Assistant  Secretary of State Carson said Monday at a forum on U.S. policy toward Nigeria held at the Center for Strategic and International Studies (CSIS) in Washington, D.C.

“While some seek to inflame Muslim-Christian tensions, Nigeria’s ethnic and religious diversity, like our own in this country, is a source of strength, not weakness,” he added,  "and there are many examples across Nigeria of communities working across religious lines to protect one another.”

Thankfully, these comments did not go unnoticed by others who cover the continuing persecution of Christians from the militant Islamic Muslim terrorist community, and in particular Boko Haram.   CNS News reported on the comments, as did Gather.com and the Assyrian International News Agency in their piece Christian Blood on Obama's Hands, as well as other news agencies.

Raymond Ibrahim wrote a stellar article exposing how the media, and in this case, also the Obama Administration, is whitewashing what is really happening with Muslims persecuting Christians.  You can read the full article here.  Here's a short section of it for you.

When it comes to Muslim persecution of Christians, the mainstream media (MSM) has a long paper trail of obfuscating. While they may eventually state the bare-bone facts—if they ever report on the story in the first place, which is rare—they do so after creating and sustaining an aura of moral relativism that minimizes the Muslim role.

Recently, for instance, in the context of the well-documented suffering of Christians in Egypt, an NPR report declared, "In Egypt, growing tensions between Muslims and Christians have led to sporadic violence [initiated by whom?]. Many Egyptians blame the interreligious strife on hooligans [who?] taking advantage of absent or weak security forces. Others believe it's because of a deep-seated mistrust between Muslims and the minority Christian community [how did the "mistrust" originate?]." Although the report does highlight cases in which Christians are victimized, the tone throughout—and even from the title of the report, "In Egypt, Christian-Muslim Tension is on the Rise"—suggest that examples of Muslims victimized by Christians could just as easily have been found (not true). The accompanying photo is of a group of angry Christians militantly holding a cross aloft—not Muslims destroying crosses, which is what prompts the Christians to such displays of solidarity.

Two more strategies that fall under the MSM's umbrella of obfuscating and minimizing Islam's role—strategies with which the reader should become acquainted—appeared in recent reports dealing with the jihadi group Boko Haram and its ongoing genocide of Nigeria's Christians.

First, some context: Boko Haram—acronym for "Western Education is a Sin", its full name in Arabic is "Sunnis for Da'wa [Islamization] and Jihad"—is a full-throated terrorist organization dedicated to the overthrow of the secular government and establishment of Sharia law. It has been slaughtering Christians for years, with an uptick since the Christmas Day church bombing in 2012, which left at least 40 Christians dead; followed by its New Year ultimatum that all Christians must evacuate the northern regions of Nigeria or die—an ultimatum Boko Haram has been living up to: hardly a day goes by without a terrorist attack on Christians or a church, most recently on Easter day, leaving 20 dead.

Ibrahim goes on to share more specific examples of how the media blurs the lines between who is the actual persecutor and who is the victim.  And he also exposes how the media and how government officials, like former President Bill Clinton, muddy the waters to make the issues look more like problems having to do with poverty, as opposed to what it really has to do with religious ideology.

The bottom line is this, Boko Haram is completely acting out their religious idealogy which tells them to murder Christians because of their religious beliefs.  Their sole goal is to murder and exterminate any and all Christians who come into their path.  The blood of the martyrs cries out daily because of the religious fervour of Boko Haram and their constant murdering of Christians.  How anyone can honestly report in the media or say with a straight face that the religion of militant Islamic extremist groups like Boko Haram isn't the driving force behind wanting to enforce Sharia law and kill anyone who doesn't agree with their ideology is beyond me.  The blood of the martyrs is all over the ground, crying out otherwise.

Posted by The Voice of the Martyrs on April 17, 2012 at 08:10 PM in Christian News, Christian Persecution | Permalink