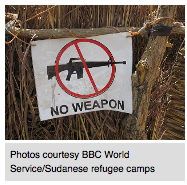 Sudan (MNN) ― Sudan's Khartoum government  says the country is officially in a state of war with South Sudan.

Khartoum began the week with a wave of air raids on Southern border areas, killing several civilians and hitting a UN peacekeeper base. South Sudan struck back with a vow to hold their positions in a contested oil field seized from Khartoum's army.

Todd Nettleton, spokesman with the Voice of the Martyrs USA, says disillusionment is growing because less than a year ago, "there was great fanfare about this. There was a peaceful transition, and yet now today we see the two countries really on the brink of going back to what was two decades of civil war when it was one united country."

Nettleton goes on to explain, "There is a lot at stake, but a lot of it comes down to oil and money. There is oil along that border region, and both countries want to lay claim to it. Both countries want to lay claim to the money that they will earn if they could control those oil fields." These issues threaten to dissolve the 2005 peace accord that brought an end to a two decades' old civil war. In that conflict, some two million people died between 1983 and 2005.

Both sides are accusing each other of failing to abide by the 2005 Comprehensive Peace Agreement (CPA), which effectively ended decades of war between the north and south.

Hundreds of thousands fled the crisis zones and sought refuge wherever in the south and across the border to Ethiopia, Chad and Kenya. The root of the conflict: religious persecution, economic, ethnic or tribal? Nettleton says, "When you point to the conflict and you say, 'This is the root cause of it,' that is a vast oversimplification because all of these different factors play into the animosity and play into the things that are happening."

Open Doors USA says northern Christians experienced greater vulnerability after southern Sudan seceded in a July referendum. It seems they were targeted amid isolated military conflicts, which vaulted the country to 16th on the 2012 World Watch List of the top 50 of the countries known for their persecution of Christians.

Territorial violence flared on border areas with South Sudan in the provinces of Abyei, South Kordofan, and Blue Nile, and "Christian communities were disproportionately affected," according to the report.

So while not targeted persecution, there are some parts of the conflict that include impact on the Gospel. "There is danger for all of the people there, so the people who are Christians, the people who are doing evangelism, are included in that. What we have seen since the separation of the two countries, particularly in Sudan in the northern part, is really something where the government is changing how they deal with Christians."

The Voice of the Martyrs is also on the ground through partners. "We are involved with helping pastors, helping provide training to pastors. We are involved in providing Bibles and getting God's Word into people's hands. We're also involved in very basic humanitarian things."

Pray that Christians throughout Sudan will continue to entrust themselves to Christ and preach the Gospel boldly. Pray also that peace, justice, and religious freedom may be firmly established.

Posted by The Voice of the Martyrs on April 18, 2012 at 04:45 PM in Christian Persecution, Mission Network News | Permalink