Persecution Blog: This Grave is the Doorway to the Heavenly City

This Grave is the Doorway to the Heavenly City 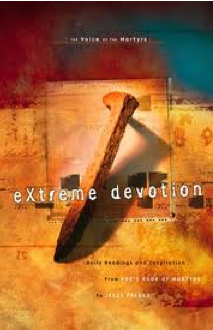 As you read today's devotion from the book Extreme Devotion, I pray that you will feel the courage of the woman you're reading about.  It is amazing her heavenly perspective under the threat of her death for believing in Jesus.  Do you have that type of courage?

It was almost midnight as the women prisoners heard the Communist guards arrive. They quickly gathered around the condemned, a young woman of twenty who had been sentenced to die for her faith in Christ. They whispered hurried good-byes. There were no tears from the young Romanian woman, no screams for mercy.

Earlier that evening, the prisoners had listened to the young woman, her face glowing with love. “For me, this grave is the doorway to a heavenly city,” she had told them. “Who can tell the beauty of that city? There, sadness is not known. There is only joy and song. Everyone is dressed in the white of purity. We can see God face-to-face. There are such joys that human language cannot express. Why should I weep? Why should I be sad?”

She was engaged to be married, but this night, she told them, instead of being with her earthly fiancé, she would meet her heavenly bridegroom.

The pitiless guards entered the cell, and the woman stepped toward them, ready to go. As she left the cell, surrounded by guards, she began to recite the Apostles’ Creed. Minutes later, with tears streaming down their faces, the remaining prisoners heard shots. The executioners thought they had ended the young woman’s life, but they had only sent her to live forever in a much better place.

Courage is the bridge that carries us from a nominal existence on earth to an inexplicable longing for a heavenly future. Those who fully understand the certainty of heaven’s existence find it easier to exchange their comparably paltry lives on earth for eternal citizenship in heaven. Courage helps us to let go of all we cling to on earth—all the things that make us long to stay here. It takes courage to believe in a life after death. After all, life on earth is all we really know until the moment we die. We are courageous when we launch out in faith, believing Christ has made it possible for us to cross into eternity with him. Once we have made that firm decision, we can face life with purpose and death with courage.

Posted by The Voice of the Martyrs on February 06, 2012 at 02:09 PM in Christian Persecution, Extreme Devotion | Permalink