Persecution Blog: Pastor Youcef Execution Could Come at Any Time

Pastor Youcef Execution Could Come at Any Time 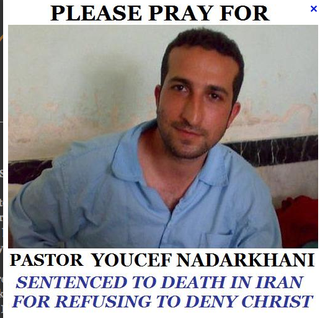 According to Present Truth Ministries (closely connected with Nadarkhani), this is grim news. Todd Nettleton, a spokesman for Voice of the Martyrs USA , confirms the news.  "Apparently, that execution order has not been delivered to his family has not been delivered to his attorneys, but the report is that it has been signed. That means that at any time, he could be executed."

Often the government will execute people without any prior notice to attorney's or family.   It's also unclear whether it has been approved by the Ayatollah who is the head of the Judiciary Sadegh Larijani.

Nadarkhani was born to a Muslim family and admits that he was introduced to the teachings of Islam, but claims he never accepted the faith.  That was the basis of his appeal to the High Court on the apostasy verdict.

Nettleton explains, "His reply to that is 'well no. I wasn't a practicing Muslim this execution order being signed says that the court has not approved that logic. They are saying 'yes in fact, you were a Muslim. Because you're a Christian now, you're an apostate and you'll be executed for that apostasy."

Pastor Youcef has refused to recant his faith during the three years he's been separated from his wife and two sons.  His conviction and sentence has been delayed due to international pressure, according to other reports from Present Truth Ministries.

Meanwhile,  on February 17, Rep. Joseph Pitts (R-PA) introduced a resolution denouncing Iran for its leaders' ruling of apostasy against Youcef Nadarkhani and calling for his immediate release.   So far, it has the support of seven other members. Nearly 90 members of Congress previously signed a letter supporting Nadarkhani.

When asked if international pressure would be enough to intervene again, Nettleton responded, "The most important thing we can do is to pray. There are petitions you can sign. We have Pastor Youcef on PrisonerAlert.com. They can also send emails to Iranian authorities asking that he not be executed."

Given the application of the apostasy law,  one would think it would have a severe 'chilling effect' on evangelism. Quite the opposite, says Nettleton.  The Arab Spring and Iran's Revolution played a big role in that.

People are looking for an anchored Truth. "So, there's hunger for the Gospel, there's an openness for the Gospel and the Church is growing at a rate  that is really mind-boggling."

Ask the Lord to uphold and sustain Youcef, his wife, and their two children. Pray that this family may soon be reunited. Pray for Youcef's legal team and all those in authority connected with this case.

Pray the Body of Christ will continue to multiply and mature despite persecution.

Posted by The Voice of the Martyrs on February 22, 2012 at 04:10 PM in Christian Persecution, Mission Network News | Permalink