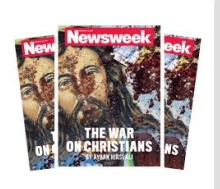 Today I would like to thank the editors at Newsweek and Ayaan Hirsi Ali for doing a cover story on the plight of Christians.

Ayaan has done a stellar job of discussing some of the reasons why persecuted Christians do not get the coverage they should and also lays out a history of recent persecution of Christians worldwide.    I commend the piece to you.  Click here to read it in its entirety.

We hear so often about Muslims as victims of abuse in the West and combatants in the Arab Spring’s fight against tyranny. But, in fact, a wholly different kind of war is underway—an unrecognized battle costing thousands of lives. Christians are being killed in the Islamic world because of their religion. It is a rising genocide that ought to provoke global alarm.

The portrayal of Muslims as victims or heroes is at best partially accurate. In recent years the violent oppression of Christian minorities has become the norm in Muslim-majority nations stretching from West Africa and the Middle East to South Asia and Oceania. In some countries it is governments and their agents that have burned churches and imprisoned parishioners. In others, rebel groups and vigilantes have taken matters into their own hands, murdering Christians and driving them from regions where their roots go back centuries.

Click here to keep reading and please thank Newsweek for the coverage.

Posted by The Voice of the Martyrs on February 06, 2012 at 03:12 PM in Christian News, Christian Persecution | Permalink