He Preached His Sons Funeral 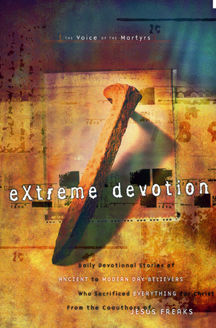 Be inspired by this inspirational story from the book Extreme Devotion, which you may purchase in our The Voice of the Martyrs bookstore.

"I feel as if one of my arms has been cut off,” said Dr. P. P. Job. It was the most difficult sermon of his life: the funeral for his own son. His voice was heavy with emotion. “But with whatever I have left, I will continue to serve Christ’s kingdom.”

Dr. Job directs The Voice of the Martyrs’ work in India and often risks his life traveling to encourage Christians in restricted nations. He also preaches at large crusades in India and has seen thousands come to Christ.

His work has angered radical Hindus in his homeland. In June 1999, a rock hurled through his car window hit Dr. Job in the forehead, leaving a bloody gash. A week later Dr. Job’s youngest son, Michael, was walking near the medical school where he was studying to become a doctor. A Fiat driving full speed crashed into Michael and then drove off. The perpetrator was never found. Michael, with massive injuries, fell into a coma and died days later.

As he promised, the loss of his son has not stopped Dr. Job’s ministry. Since Michael’s death, Dr. Job has preached more crusades, winning thousands to Christ. The cost for Dr. Job’s ministry has been high: his own son. But he is not alone. God also knows what it is like to lose a son so that others may see salvation.

The road ahead for the persecuted church is steep and may be long. For over two thousand years, many have been motivated by evil in their opposition to the gospel of Christ. As Christians we must be willing to pay a price—even if we are never required to do so. This is the lesson of Abraham’s life. He was willing to sacrifice Isaac—through whom the blessing was going to come. Being willing to sacrifice for our commitment to Christ makes us stronger. The idea of sacrifice clarifies our goals. Sacrifice solidifies our character. Commitments that cost us something change our family, our neighborhood, and our world for Christ. We learn how strong we really can be. Although we don’t wish to lose that which we hold dear—we strive to remain undeterred in our devotion, despite any circumstances.