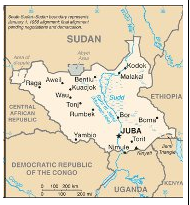 The heat surrounding the issue has given way to concern that war may be imminent yet again between Sudan and its southern counterpart.

Four bombs fell on the Yida refugee camp Thursday in South Sudan, which is home mostly to refugees who have fled fighting on the border of Sudan and South Sudan. Most counts now agree that 12 people were killed in the incident and about 20 wounded in the camp of 23,000.

"There are people there who have fled the violence--they are there to try and get away from the violence in Northern Sudan, and now the violence is sort of coming to them where they are," points out Todd Nettleton with Voice of the Martyrs.

In the United States government's press release concerning the bombing, Sudan's government was presented as responsible without question. "The United States strongly condemns the aerial bombardment by the Sudan Armed Forces," announces the release.

Yet according to several sources, the spokesman for the Sudan Armed Forces, Sawarmi Khaled, has vehemently denied any involvement with the attacks. The Associated Press reports that Sudan's U.N. ambassador, Dagga-Alla Elhag Ali Osman, also claimed the accusations were fabricated. The United States U.N. ambassador said Osman's account was a blatant lie.

The sharp disagreement, along with the firm belief of many governments that Sudan is the culprit, has instilled the fear of war in many. "It seems to point toward conflict between the two Sudans after the [summer's] sort of peaceful division of the country into two separate nations," comments Nettleton.

The Yida camp is right around that disputed area in northern Sudan.

All Africa reports confirm that "incidents like this show both sides' belief that the other is sponsoring rebels on their territory, [contributing] to a rapidly-deteriorating relationship between Sudan and South Sudan."

Ramped up conflict and potential war not only could endanger the lives of millions, but could potentially affect Christians directly.

"It could potentially be an issue of persecution of Christians, because often the northern government has in the past targeted Christians, targeted pastors, and sort of made that a part of their mission," explains Nettleton. He says although there's no indication that the bombing was religiously-connected, "It would be very clear that the northern Islamic government wouldn't be thrilled with Christian ministries doing activities ministering to people especially so close to the border."

Nettleton asks Christians to pray for peace and for strength for believers. Pray that war would not break out, and that Christian workers--which are many inside Yida's walls, but also within South Sudan as a whole--would continue to boldly share Christ's peace and love with the nation. Pray for their protection as well.