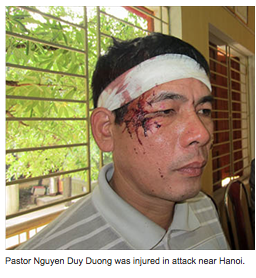 HANOI, Vietnam, November 16 (CDN) — A gang of men attacked leaders of a Baptist house church network near Hanoi on Sunday (Nov. 13), leaving one pastor unconscious and seriously injuring several others, including women and teenage children.

Leaders of the Agape Baptist Church were participating in a spiritual renewal meeting at the home of pastor Nguyen Danh Chau in Lai Tao village, Bot Xuyen commune, My Duc district, when the gang intruded at 9:30 a.m., sources said. Beating people and smashing property, the gang seriously injured more than a dozen participants and warned Nguyen Danh Chau that they would kill him if he continued gathering Christians, the sources in Vietnam said.

With the attack underway, the sources said, some gang members ran outside and announced to the neighborhood, “Oh heavens, the Christian pastors are savagely beating up people!” This attracted a large crowd, which the gang hoped would prevent any Christians from escaping.

The seriously injured Christians included five male pastors, four female pastors and other church leaders, and several of the leaders’ teenage children. The worst wounded, Nguyen Danh Chau, lay unconscious for many hours, and as of midnight Tuesday (Nov. 15), he was still suffering severe chest, stomach and head pain.

One pastor’s wife, Nguyen Thi Lan, was still unable to walk and function normally at press time after she was struck in the stomach and groin. Others remained weak from loss of blood. The Christians were punched in the mouth and face, the chest and the back. Some were savagely kicked as they lay on the floor.