The following is from our friends at China Aid and was posted on November 14th on their blog.  Please keep our Chinese brothers and sisters in your daily prayers as they endure ongoing persecution for their faith and relationship with Christ Jesus.

(Tai’an, Shandong—Nov. 14, 2011) A 125-year-old church built by Anglican missionaries in coastal Shandong province is facing demolition despite being a government-approved Three-Self Patriotic Movement church, and furious church members say they aren’t afraid to fight to the death to save their church, ChinaAid has learned.

Real estate developers have already won government approval for the demolition, despite the fact that the four buildings that remain in the church compound that was built in 1886 were designated in 1994 as protected national historical landmarks.   At least one wall of the church compound has already been knocked down, and irate church members are seeking a temporary government order to stop the demolition and trying to draw greater attention to their plight.

A church member posted an online appeal on Nov. 8 that said:  “We are now facing internal disputes and external attacks.  Please pray for us, pray that our pastor will stand up and stand with us to do battle.  The real estate developer and the government are looking for us everywhere.  Today, so-and-so’s cell phone and internet access were both cut off.  We want to give everyone an accounting and distribute some materials. So-and-so snuck me out [of the church compound] and I’ve been hiding here, there and everywhere, getting the news out to everyone.  We are not afraid to die, but we would not leave everyone without an answer.  Pray for us!”

The Tai’an Church’s troubles are playing out even as a Chinese government exhibit of Chinese Bibles is on tour through the United States—a propaganda show to convince Americans that religious freedom exists in China and to divert attention from the ongoing government persecution of Christians.

The church is located on Lingzhi Street, in the Taishan District of the city of Tai’an.   The church compound was originally 0.82 hectares or just over 2 acres when built in 1886 by two British missionaries.  In the 1980s, some of the buildings were either destroyed or taken over for use by government offices.  The four remaining buildings were designated historical sites in 1994 and are supposed to be under government protection.

A year ago, however, demolition crews started to move in on the church, and on Nov. 16, 2010, were stopped by 30 to 40 church members who occupied the site in a spontaneous protest.  While some took turns protecting their church, others sought government help.  On Nov. 20, when the developer again tried to start the demolition, several elderly Christians stood in their way, achieving a temporary suspension of the demolition. 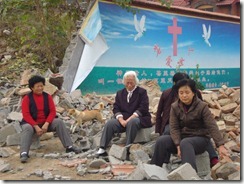 Recently, the wall of the part of the church that had been the Christian high school set up by the Anglican Church was forcibly torn down.  Elderly church members who tried to stop the destruction were beaten to the ground, which aroused the anger of both church members and society as a whole.  The church on Nov. 9 lodged a formal appeal with the government, seeking lawful handling of church property, a stop to the demolition and return of occupied church property.

(Photo: Elderly church members sit amidst the rubble of one wall of the church compound that was torn down.)

The last part of the appeal reads: “We sincerely hope that the central government’s policy on religion can be carried out in reality, so as to win the trust of the people and bring a resolution to the Tai’an Church’s long-standing property dispute.  All the members of the Tai’an Church have full confidence in the God whom we believe and in his words.  Jesus said, ‘Render unto Caesar what is Caesar’s, and unto God what is God’s.’ …”

ChinaAid expresses its shock and condemnation of this incident.  This once again demonstrates that it is not just house churches like Shouwang Church in Beijing that face government persecution.  Even the legitimate rights of government-approved churches that are part of the Three-Self can be arbitrarily trampled.  Is this not convincing evidence that the Bible exhibit on which the Chinese government has expended a huge amount of material and  human resources is nothing but a case of ‘the emperor’s new clothes’?