« You Love Your Bible, Help Someone Else to Receive One | Main | Prisoner Alert: Youcef Nadarkhani » 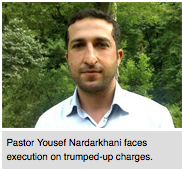 Iran (MNN) ― The life of an Iranian pastor continues to hang in the balance as the Iranian state media is now getting involved in the case. 34-year-old Pastor Yousef Nardarkani was arrested two years ago this month for protesting Muslim education for his children because he is a Christian. He was convicted of apostasy, but now new false charges are being leveled against him.

Todd Nettleton with Voice of the Martyrs says, "Now they're saying that what he's actually going to be executed for is not apostasy, not becoming a Christian, but actually rape and extortion that are the charges that he will be executed for. So it's really a 180-degree turn for the Iranian government."

According to Nettleton, this is mindboggling. "After an initial court hearing, an appeal to the Supreme Court, and then another hearing back at the local court -- after all those hearings where they never talked about extortion and never talked about rape, now they're saying he's actually going to be executed for rape and extortion."

There something you can do to help Pastor Nardarkhani. Nettleton says you can pray for him as he continues to be in prison. You can also "go to PrisonerAlert.com [where] you can write Pastor Yousef himself and also send e-mails to Iranian government officials, including the office of President Ahmodinejad. So we can pray first, and then we can also have a voice for him, as well."