Persecution Blog: Teen Girl Abducted, Raped & Tortured Unless She Converts; Police Do Nothing

Teen Girl Abducted, Raped & Tortured Unless She Converts; Police Do Nothing 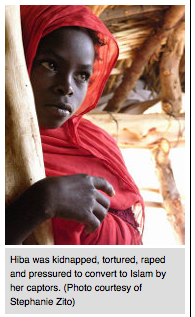 The following story is heartbreaking and I would ask on this  young girl's behalf, for your prayers for her.  Not only was she kidnapped, raped, and tortured but this happened because she is a Christian.  Please read the following from our friends at Mission Network News and Compass Direct who reported on this story.  Please also write down Hiba's name and continually pray for her.

Sudan (MNN) ― Kidnapping, rape, torture, and threats are all methods of persecution suffered by Christians in Sudan at the hands of Muslims. One teenage girl who recently escaped from the hands of her Islamic abductors suffered all four.

Voice of the Martyrs, Canada (VCM) reported that Hiba Abdelfadil Anglo, 16, was abducted last year on June 17 by a Muslim gang. She was just reunited with her family last month after several months of trauma and suffering.

She was taken and moved around various locations in Khartoum by her kidnappers. All the while, Hiba was constantly pressured to convert from Christianity to Islam. She was often locked in a room and beaten until she lost consciousness.

In trying to recount the story to Compass Direct, Hiba broke into tears. "They did many bad things to me," she says.

The group members tortured her and referred to her family as "infidels." They would not let her pray Christian prayers, and the leader of the group sexually abused her. "Apart from abusing me sexually, he tried to force me to change my faith and kept reminding me to prepare for Ramadan," says Hiba.

Two days after Hiba was kidnapped, her family started receiving threatening phone calls and text messages demanding a random of 1,500 Sudanese pounds ($560 USD) if they wanted her back.

Hiba's mother, Anglo, went to the police station to open a case to find her daughter, but the police refused unless Anglo converted to Islam as well.

Hiba tried to run away three different times, but each time her captors caught her and severely beat her for trying to escape. Freedom finally did come when Hiba gave enough of a pretense of converting to Islam for her captors to lighten up on guarding her. She got out and begged a motorcyclist to give her a ride to her home two hours away.

Such a situation just shows the intensity of the religious profiling at the level of law enforcement in Sudan and the ongoing persecution there.

Even Hiba's captors were so sure of their safety if they were caught. Hiba says she was warned by her captors, "Even if you call the government, they will not do anything to us."

Anglo says, "It is good that those who prayed for us to know that their prayers were answered, and that my daughter is back at home with me. I also need prayers because I am jobless since the time my daughter was kidnapped."

Please pray for Christians in Sudan suffering persecution both from Islamic groups and from lack of justice by the law. Pray for the emotional and spiritual wellness of Hiba and she and her family recover in Christ from this traumatic time.