This week we would like to ask you to write Zhang Huamei who has been in prison for 636 days.

On Nov. 25, 2009, Zhang Huamei and four other Linfen-Fushan church leaders from Shanxi Province were sentenced to criminal detention for two to seven years, according to China Aid Association. The five church leaders were accused of "gathering people to disturb the public order," because they organized a prayer rally on Sept. 14, the day after 400 military police raided the church's grounds. During the raid, more than 30 believers were seriously wounded and 17 buildings were destroyed. 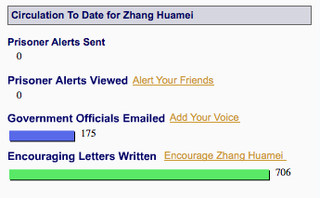 Will you also please forward this request to your friends and family so they can join in being a minister to the persecuted church.