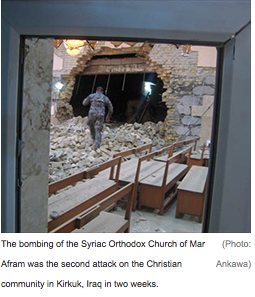 Attack on Syriac Orthodox building in Kirkuk is its third in five years.

ISTANBUL, August 16 (CDN) — An insurgent blast left a church building in Kirkuk, Iraq severely damaged on Monday (Aug. 15) in a second round of attacks against the city’s Christian community in two weeks.

The bombing of the Syriac Orthodox Church of Mar Afram was the only attack against Christian targets amid a wave of violence that swept across Iraq yesterday, hitting 17 cities and claiming about 70 lives, according to The Associated Press.

An explosive device next to one of the church’s walls exploded at 1:20 a.m. on Monday. Photos showed the bricks of one of the side walls strewn across the church floor and furniture, and one of the metal doors twisted open.

In two other separate attacks on Monday, insurgents placed deadly vehicle bombs in the center of Kirkuk, killing one and injuring four.

No Christians were killed in the attack against the church. Police announced higher protective measures for Kirkuk’s churches, according to Alsumaria Iraqi Satellite TV Network.