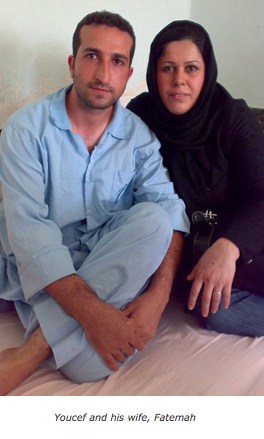 “At this time, there is no more action that can be done inside of Iran to overturn this sentence,” a VOM contact said. “It can be carried out at any time. The only options right now are to immediately and swiftly bring international attention to the issue.”

Nadarkhani, a pastor from Rasht, about 750 miles northwest of Tehran, was arrested in October 2009 after he protested a government policy that required children, including his 8- and 9-year-old sons, to study the Quran in school. Nadarkhani told school officials that the Iranian constitution allows for freedom of religious practice. As a result of his protest, secret police called him before a political tribunal and arrested him for protesting. The charges were later amended to apostasy and evangelism of Muslims. Nadarkhani was tried on Sept. 21–22, 2010, by the 1st Court of the Revolutionary Tribunal and sentenced to death on Nov. 13 for apostasy.

Nadarkhani is imprisoned in Lakan prison, where authorities have used various methods, including medication, to convert him back to Islam, according to Present Truth Ministries. After Nadarkhani refused to convert to Islam, his wife was arrested, put on trial without an attorney and sentenced to life in prison. She was later released after an attorney appealed her sentence. The Nadarkhanis’ children were cared for by a relative while they were both in prison.

Please lift up Pastor Nadarkhani urgently before the Lord and ask for his release. Go to his profile on www.prisoneralert.com to email government officials on his behalf.