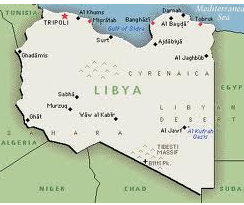 Over the weekend BosNewsLife, a website that covers news about Christian persecution, highlighted some of the latest concerns about Christians and Libya.  The situation is not good.

Here are a few paragraphs from the BosNewsLife report:

As violence spread mission group Arab World Ministries said Libya's often tiny churches, including evangelical home churches, need "a spirit of boldness in this chaotic time" amid concerns over the future of the troubled North African country.
It was not immediately clear what impact the fighting would have on Christians, who under Gadhafi face harassment at times or are banned from sharing their faith with Muslims, missionaries and rights activists have said.
GOOD NEWS/BAD NEWS REGARDING TELEVISION
Here in America we have no shortage of Christian television for anyone to watch.  However, this is not the case right now in Libya.  According to Sat-7 a Christian television channel, television has been blocked by Gadhafi.  The good news, however, is that Christians are still being reached with the gospel.

Another Christian broadcaster, 'Heralding Christ Jesus’ Blessings' (HCJB) experienced similar problems but said it still reaching Christians and others in Libya through a satellite system from Europe. "The satellite provider we have from Europe beaming into North Africa has been able to stay on the air," said HCJB Global President Wayne Pederson. "Other satellite signals have been blocked, but the Lord has enabled us, for our radio signal, to continue 24/7 into the households of North Africa and the Middle East at this time."

Before the latest developments, Arab World Ministries already announced it has asked believers around the world to pray for Libya's small Christian community, comprising about 2.5 percent of the North African country's mainly Sunni Muslim population of roughly 6.6 million people.