Persecution Blog: 35,000 Bibles Released in Malaysia Under One Condition

35,000 Bibles Released in Malaysia Under One Condition

This is a related story to the one I posted previously. This is from our friends at Mission Network News today. 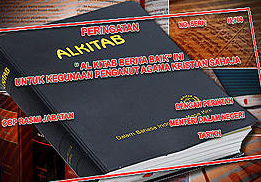 Malaysia (MNN) ― Christians held a protest yesterday against the release of 35,000 "Christian-only" Bibles in Malaysia.

In 2009, 5,000 Bibles were confiscated by the Malaysian government. Since then, attempts to import the Bible in Malaysia's national language, Bahasa Malaysia, have been thwarted, according to Christian Today. 30,000 more copies are currently being withheld.

The reasoning lies in one disputed word within the text: "Allah."

"There has been a lot of upheaval in Malaysia regarding the use of the word ‘Allah' to describe God. In the Christian Bible, that word is used to describe God," explains Todd Nettleton with Voice of the Martyrs. "Muslims in Malaysia have protested against that, saying, ‘Wait a minute. That's going to confuse Muslims because Allah is really the God of Islam. If the Christians are using that word, too, that's going to create some problems.'"

Interestingly enough, in a 2009 case against a Catholic newspaper, the High Court in Malaysia ruled that they were allowed to use the word "Allah" for God.

In what Nettleton says appears to be an effort to get Christian votes in the upcoming elections--and yet appease Muslim Malay who are afraid of others getting confused by the Bible's teachings, the government is releasing the Bibles under a few conditions.

"Now the government is saying, ‘Okay, we'll go ahead and release these Bibles, but we want you to stamp on the front of them that these are for the use of Christians only, not for the use of other religions,'" says Nettleton. "They also want each of the Bibles to be stamped with a serial number, which obviously then presents the opportunity for them to be traced. If the Bible turns up later in the hands of a Muslim or in the hands of someone they say shouldn't have it, they could trace it back and say, ‘Okay, where did this Bible come from? Who was it?' and try to get back to the people who are distributing Bibles there."

The 5,000 detained Bibles from 2009 have already been stamped without permission.

Christians have mainly responded in outrage to the government offer to release all 35,000 Bibles if stamped. Believers say they won't accept delivery of the Bibles under these threatening conditions. Protests took place yesterday morning to reject the so-called "desecrated" Bibles, and more protests are rumored to happen again this weekend.

The action seems to threaten evangelism if only Christians are allowed to have the Bibles. Nettleton says it also appears to support the idea that the government desires Malaysia to remain a mostly-Muslim country.

"I think what it means is that the government is going to do everything they can to make it difficult, particularly for Christians who are evangelizing, and especially evangelizing among the Malay people," Nettleton notes.

Prayers are needed for our brothers and sisters in Malaysia. Pray for wisdom in how to approach the situation, and for God's Word to come freely into Malaysia soon.