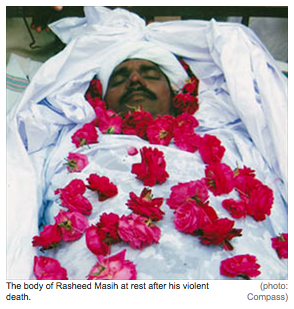 Rival merchants threatened to kill potato seller if refused to convert to Islam.

The six men had threatened to kill 36-year-old Rasheed Masih unless he converted to Islam when they grew resentful of his potato business succeeding beyond their own, according to Masih’s younger brother Munir Asi and a local clergyman. The rival merchants allegedly killed him after luring him to their farmhouse on March 9, leaving him on a roadside near Kothi Nand Singh village in the wee hours of the next day.

The Rev. Iqbal Masih of the Mian Channu Parish of the Church of Pakistan said Rasheed Masih was a devoted Christian, and that both he and his brother Asi had refused the Muslims’ pressure to convert to Islam.

“As the Christian family strengthened in business and earned more, the Muslim men began to harbor business resentment, as Muslims are not used to seeing Christians more respected and richer than them,” the pastor said. “That business rivalry gradually changed into a faith rivalry.” CLICK HERE TO READ THE FULL ARTICLE.