On July 26, 12 Christians were killed, including three pastors, in northern Nigeria after members of the Islamic extremist group Boko Haram launched attacks on police and government bases, according to contacts at VOM Canada.

The violence, which began in Bauchi state, spread to Borno, Kano and Yobe states. Churches were set ablaze and several people were abducted, including Christians. Many believers were threatened with death if they refused to convert to Islam. According to media reports, assailants behead three pastors: Pastors Sabo Yukubu, Sylvester Akpan and Pastor George Orji. The assailants were reportedly acting on the instruction of the extremist group's leader, Mohammed Yusuf. Yusuf was later killed by authorities.

The militants attempted to force the pastors to convert to Islam, but they refused to abandon their faith. They were then beheaded by guards who shouted "Allah Akbar" and fired several gunshots into the air in celebration.

These recent reports of persecution in Northern Nigeria reflect the trials believers endure. The Voice of the Martyrs actively supports persecuted believers in many ways through the Families of Martyrs fund, resources for widows to start businesses and a free education at Stephen Centre. Pray God will comfort the families of those killed in these attacks. Pray the peace of Christ will rule the hearts and minds of Nigerian Christians in the face of ongoing threats and danger.

John Foxe, a young teacher at Magdelen College, pleaded in prayer, “They call themselves your priests and ministers, but they worship themselves and their political power. Help them realize that there is no need for another mediator between God and man but Christ Jesus and his Word.”

Someone overheard John and immediately reported him to the college administration. They accused him of holding beliefs in rebellion to the government and against the state church. When he refused to deny his convictions, the council expelled him from the university.

Because of this, John had great difficulty finding work as a teacher. One day, exhausted with hunger, he sat praying in a church. A man John had never met suddenly appeared and thrust a sum of money into his hand. “Cheer up,” he said. “In a few days new work will present itself to you.” A few days later he was hired as a tutor.

Under the reign of Henry VIII, Christians like John were tolerated. When Mary I came to power, however, she executed any who defied the religious edicts of the state. Three hundred people died during her five-year reign. John and his pregnant wife fled England to Belgium, barely escaping being apprehended.

In defense of those who died for their faith, John wrote Foxe’s Book of Martyrs.

It is one thing to read about persecution, yet quite another to experience it. In the same way, many people read about the lives of committed Christians and admire their courage from afar. Yet they have no firsthand experience of faith to call their own. While they extol the martyrs’ courage, they cannot relate to its source: a personal relationship with Jesus Christ. They may read the gospel message, yet they do not respond in faith. Martyrs lived and died calling others, even their oppressors, to faith in Christ. Could they be calling you toward Christian commitment even now as you read their stories? Don’t merely extol their faith when you are invited to experience it firsthand.

If you have not yet purchased your copy of Foxe's Book of Martyrs, please click here and support VOM.

What Is Your Favorite Story in This Month's VOM Newsletter? 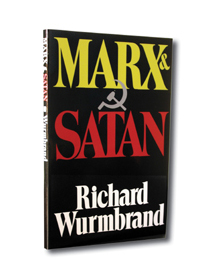 Every month the Voice of the Martyrs puts out a great newsletter and this month the issue focused on China.  I want to know from those of you who read the newsletter, what was your favorite article?  What encouraged you the most?  What do you tell your family or friends about after you read the newsletter?

If you are not yet a subscriber to the free VOM newsletter, please sign up right there to your right and you'll begin getting this great resource monthly.
I also wanted to tell you that this months special offer from the newsletter is the book written by Richard Wurmbrand called Marx and Satan.  For a donation of any amount to VOM you will receive a copy of this wonderful book that will help you understand the destructive nature of communism and the connection to Satan.
Click here to learn more about the book - and don't forget to tell us what your favorite story from this month was.  Comments are open!

Today we wanted to share with you another video of our upcoming series Underground Reality Columbia. Enjoy.

This story is tragic and really leaves me speechless when I consider the extent of what happened to this woman.  The Assyrian International News Agency and International Christian Concern are reporting on the story of a pregnant Christian woman who was beaten and dragged naked through the Pakistan police station.  The police knew she was pregnant and still treated her this way.

The woman, Farzana Bibi, worked as a maid in the house of a wealthy Muslim. During a wedding held at the house, some jewelry was stolen from some of the landlord's female relatives. The police were called, and when they arrived at the scene they arrested two maids: Farzana and a Muslim woman named Rehana. Nazir Masih, Farzana's husband, said, "Police registered a fake theft case against my wife and Rehana without any proof."

Nazir went on to say that the police tortured his wife even though she told them she was pregnant. He told ICC, "Sub-Inspector Zulfiqar and Assistant Sub-Inspector Akhter subjected her to intense torture. They stripped off her clothes and dragged her naked around the compound of Cantonment Area Police Station in Kharian. They humiliated and tortured my wife, but did not do anything to Rehana."  Read the full story.

Please pray that God would comfort Farzana and Nazir and that justice would be carried out. Please also call your Pakistani embassy and ask them to defend the rights of Christians.

A few days ago ABC News covered the story of an Ohio teenager by the name of Rifqa Bary, who was raised in a Muslim home and recently came to faith in Jesus Christ.  Rigqa claims her father wanted to kill her for converting, however the father's a lawyer denies these accusations and says that the Christians that Rifqa has met are the ones saying such things.  ABC News has a wonderful video of the story, which will fill you in on the rest.  Click here to see the video.

On this Monday, I wanted to draw your attention to the nation of Oman, and ask that you take a moment to pray for believers there who are not living under complete freedom.  And we thank you for taking the time to pray and tell a friend today.