Hindus opposed to pastor’s evangelistic efforts name him, three others.

NEW DELHI, August 31 (Compass Direct News) – Hindus opposed to a pastor in a village in Madhya Pradesh, India have falsely charged him and three other Christians in the murder of a young man killed in a gang fight between two clans, according to area Christians. Pastor Kamlesh Tahed, 32, of Mehendi Kheda village, Jhabua district, told Compass he was not even in the village on Aug. 8, the day 22-year-old Roop Singh Baria was killed. Pastor Tahed, who spent 20 days in jail on false charges of “forcible conversion” in 2001 before a court declared him innocent, is in hiding. Three other Christians from his clan – Kasna Tahed, 25, Ramesh Tahed, 26, and Vasna Tahed, 36 – are in police custody, also charged in the murder of Baria, of nearby Negadia village, even though they were not present at the site of the melee either, Pastor Tahed said. Pastor Bahadur Baria of the same village’s opposing clan told Compass that in all previous conflicts – personal, religious or social – sympathizers of Hindu extremists falsely accuse area Christians as well as bait them into conflicts. Pastor Baria said what happened to Pastor Tahed also has happened to him; a member of the Tahed clan was murdered by a Baria clan gang, and his name appeared among those charged. Only after a costly court process was he exonerated from murder charges, he said. “This has not been once but every time something happens, the Christians are dragged into it,” he said.   Read more at Compass Direct.

What Are You Willing to Give for the Persecuted Church?

People are often willing to give a great deal to help persecuted brothers and sisters around the world. Seventh grade science and social studies teacher, Park Gillespie, may be the first to give his hair!

After hearing Christian workers talk to his class about Sudan, Park’s students caught a vision for helping refugees who were being persecuted for their faith. The students’ fervent compassion surprised even their teachers.

What started out as drive for the seventh graders to collect blankets for the suffering Sudanese soon spread to the entire school and eventually to the community. Gillespie contacted WBTV in Charlotte, North Carolina, and told them about what kids were doing to alleviate suffering in Sudan.

Blankets had already begun to fill the classrooms, but the question of shipping costs had not yet been addressed. When the reporter from WBTV came for the story, Gillespie mentioned that he would shave his head if they would help with the bill. Shortly after the story aired, funds began to pour in.

Thus out of his love for people he had never even met, Gillespie shaved his head. The entire school body was gathered for the shaving and the reporter from WBTV filmed the event. Americans often feel as though they can do little to help persecuted Christians in other countries. Park Gillespie proved otherwise.

Park Gillespie and his students teach us the process of how compassion moves to creativity, to commitment, and—ultimately—to cost. Park and his students were glad to pay the cost—even down to the last hair on his head! Compassion is a natural response to suffering, but it is not enough by itself. We must activate our compassion with creative solutions to problems. Next, we must commit to putting our solutions in motion and be willing to pay their cost. Where are you in the process? Have you put your compassion to work with some creative thinking? Have you made a commitment to help make a difference? Are you ready to now pay the cost?

This was carried on CBN News and comes from our fellow partners in ministry at Compass Direct. Watch.

One of the coolest ministries of the Voice of the Martyrs is the Kids of Courage program. Today I wanted to highlight a piece from the Kids of Courage website about how kids are witnessing secretly in their schools. Can you imagine doing this in the United States...wow, the faith of children inspires me. 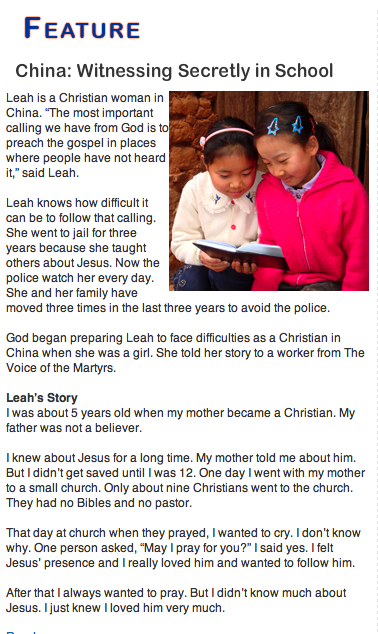 Click here to read the full article at the Kids of Courage Website and pray for your children!

If you read this blog regularly, then you know we talk about Christian persecution all of the time in India. This week marked the first anniversary of violent attacks on Christians by Hindu fundamentalists, as hundreds joined together, holding a candle light homage to remember these martyrs.  The Christian Post has the full story here.

I am really happy to report some good news today regarding a group of missionaries  who were arrested in India earlier this month.  According to a report from The Christian Telegraph, the workers were charged with "deliberate and malicious acts intended to outrage religious feelings of any class by insulting its religion or religious beliefs"

Here's more of the story:

...On the evening of August 11 around midnight, a mob of 20 Hindu extremists burst into the rented building, shouting threats and wielding sticks.

According to Mission India, the attackers beat two partners, burned Bibles, and terrified the participants who were held against their will for at least 14 hours. Another local pastor who rushed to the scene was also badly beaten.

One Christian escaped the melee and ran to the police for help. Police arrived on the scene and promptly arrested 8 of the Christians, including two members of Mission India's ministry staff. Officials also refused bail for several days.

Mission India's Don Edwards says while their team was in jail, "They did what Paul and Silas did while they were in prison. In the mornings and every evening, they had a worship service. They developed relationships with the prisoners. They shared the Gospel regularly with these people in prison."

The team's release is an answer to prayer; however, the false charges haven't been dismissed. It's not over yet, says Edwards. "It's very possible that there will be long term consequences. However, at the same time, when persecution like this sets in, often it often emboldens the Christian community to take an even stronger position."

BEIJING—On August 25, 2009, ChinaAid learned the Chinese government recently issued a secret directive calling the government agencies to dismantle at least six major house churches before the end of August. ChinaAid believes these actions have been taken in preparation for the celebration of the 60th anniversary of the CPC's rule in China.

Reliable sources told ChinaAid that the Beijing Huajie Plaza received an order from the PSB to terminate its rental contract with the Beijing Shouwang house church. One of the largest house churches in the area, Beijing Shouwang Church has been renting two floors for their worship and Sunday school services in Huajie Plaza for a few years. The church has over 1,000 church members, and most of them are intellectuals from universities. This is the most recent action against Beijing Shouwang Church since government officials forcibly shut down their church website on April 13, 2009, and raided the church on May 11, 2008.

In mid-August, three government officials, including members of the PSB and RAB, disrupted a baptism service held at a river in the Beijing suburbs by one house church from Haidian district. Outside Beijing, a TSPM church in Zhejiang was also raided, and more than 2 tons of Sunday school materials were confiscated. A house church training school in Shandong province was also raided and banned by the authorities. 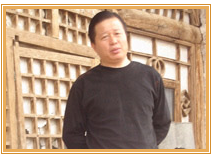 It has been a few days since we've talked to you about our Free Gao petition and how that has been going. If you receive our email updates from Prisoner Alert, you may have received this in your email.  If not, you can sign up for those at Prisoner Alert.

Since our last communication with you, the PrisonerAlert for Gao Zhisheng has been viewed over 34300 times, and over 2600 letters of encouragement have been sent. What a blessing this must have been to Gao Zhisheng -- and what a message it will have sent to the officials, that this person is cared for internationally.

Now imagine what could happen if we could double, triple or increase by ten or one hundred-fold the number of people, around the World, that are praying and writing on behalf of those imprisoned and persecuted for their faith.

You can help. Please forward this email to those you know have a heart for God's people and encourage them to sign-up too. It's the work of friends telling friends that will bring the greatest response to those who need it most. As the email does its work, you can revisit the chart below to see the effect that you have had.

Thank you in advance for partnering with us on behalf of those who suffer for the Lord.

What Are You Reading?

I LOVE to read, and recently I have been listening to God's Smuggler by Brother Andrew and all I can say is WOW, if you need a faith lift, this is a great book to get.

I am really enjoying this book because Brother Andrew shares about his faith, the ways he interacts with the Lord and the very cool ways the Lord provides for him in every case is amazing. So, if you need some encouragement from someone who has been in the mission field and has seen God's miracles, get the book.
What are you reading that has encouraged you lately?  Leave us a comment.  Thanks.