Persecution Blog: Posts from May 2009

Glenn Penner, my friend from The Voice of the Martyrs Canada has written a very important piece today on his blog.  It begins...

I have been reading the controversial new book by Zambia economist Dambiso Moyo, Dead Aid in which she argues convincingly that the billions of dollars of aid that have been poured into Africa over the past fifty years has, instead of improving the lives of Africans, made it far worse. Aid, she contends, has significantly increased poverty and stifled economic growth throughout Africa.  Take the following case in point, taken from pages 44-45:  More...

Todd shared this information in the VOM Facebook group, and I thought our blog readers would like a glimpse behind the scenes of a recipients  of the action packs.  Pretty cool! 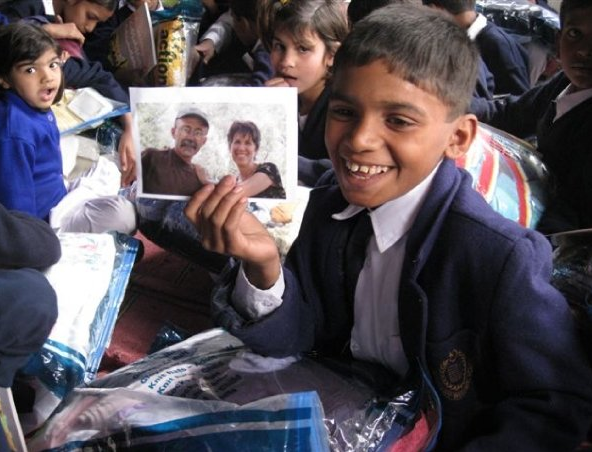 On May 23, a bomb killed two Christians and wounded 15 others at the Assumption Catholic Church, in Kathmandu, Nepal, according to The Voice of the Martyrs contacts. During a mass attended by more than 250 people, a young man and woman entered the church and placed a bag on the floor. “A few minutes later a bomb exploded sending shrapnel and nails flying into the congregation,” VOM contacts said. A 15 year-old girl was killed instantly and a 30-year-old newlywed visiting his family from India, died on the way to the hospital. Fifteen others were injured including one of the priests. Three remain critical. A second bomb was later disarmed by police before it detonated.

Meanwhile, the Nepal Defense Army, a Hindu fundamentalist group with ties to Indian Hindu extremist groups has taken responsibility for the attack. This is the same group that mutilated and murdered a Catholic priest in 2008 in Nepal and made death threats to believers and Christian leaders in Nepal. In the past the group has also taken responsibility for bomb attacks on other Christian Churches. “Their leader states that their goal is to return Nepal to a Hindu State and to rid Nepal of the Christians,” VOM contacts added.

The Voice of the Martyrs actively supports persecuted believers in Nepal. VOM encourages believers by printing and distributing Bibles, evangelistic tracts and books like Triumphant Church, He Lived among Us and Tortured for Christ. VOM encourages you to pray for the families of the deceased. Ask God to heal those who were injured and to protect believers in Nepal. Ask God to use the testimonies of believers to draw others into fellowship with him. 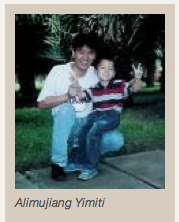 XINJIANG – On May 21, government sources told the mother of imprisoned Uyghur Christian Alimujiang Yimiti that the Kashi Public Security Bureau (PSB) is secretly planning to sentence her son to three read more.

And of course, keep on praying for all the Christians in China. 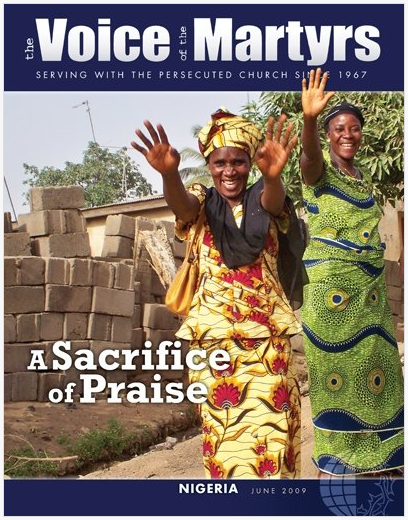 The June newsletter has two Nigerian widows on the cover, and the feature story is about the "Sacrifice of Praise" Nigerian Christians are offering. It should be in your mailbox soon. If you don't receive VOM's free newsletter, subscribe at the link on the right side of this page.

Today I wanted to introduce you to another restricted nation, and ask you to take a minute, even now as you read this, and pray for this nation.

Please also read this article - Building New Mosques Encounters Resistance in Europe which is very interesting.  The following blurb is especially interesting in light of this being a restricted nation.

It also appears to have united the town. Jewish and Christian leaders joined the Muslims in fighting for the mosque. The town mayor has donated about $700 to the project.

Apart from the far-right lawmaker, Abdoulbaki says not a single resident has opposed the new mosque.

NAIROBI, Kenya, May 27 (Compass Direct News) – A young Christian convert in Ethiopia mourning the sudden death of her baby boy was shocked to learn his body had been dug up and placed at the doorstep of a church leader earlier this month. Members of the Ethiopian Orthodox Church upset at the conversion of the teenage mother to evangelical faith were suspected of the wrongdoing. The crime occurred in Luga, 170 kilometers (105 miles) south of Addis Ababa, after 17-year-old Tsehay Desta, who recently left her Orthodox upbringing in favor of evangelical faith, had traveled there from Asela to visit her mother a month ago. During her stay, her infant boy fell ill and suddenly died on May 9. The next day an evangelical church in Luga held a funeral in which the body was buried on church grounds, but on May 11 it was dug up and left at the church leader’s door. In spite of government promises to resolve the situation, officials offered no burial land, and suspects were released the same day they were arrested. Church leaders trekked 800 kilometers seeking government help to find a burial place, but on May 16 they reburied the body in its former grave – hoping there would be no further incidents.

Aaron Klein has a great article over at WorldNetDaily about some recent destruction of crosses by Muslims.

JERUSALEM – Palestinian Christians in a normally quiet village are reeling from a series of grave desecrations this week that they say are indicative of intimidation tactics from the town's growing Muslim population.

"Christians don't feel free anymore. Our way of life is changing while the Muslim population grows," a local Christian told WND. The Christian would only give his first name, Anis, for fear of Muslim retaliation if he speaks out. He pointed out there are several other Anis's in his village, Jisna, which is located near the West Bank city of Ramallah.

This week, 70 Christian grave sites in Jisna were vandalized, with the crosses on top of the graves found smashed off, local Christians told WND.

Jisna is primarily a Christian village, but over the last 6 to 8 years, the town has seen a steady stream of Muslims, mostly due to Jisna's good quality of life. Two years ago, the first mosque was constructed in the village. If the Islamic influx continues, Jisna might go the way of so many other Palestinian cities, like Ramallah and Bethlehem, which used to be predominantly Christian but now have large Muslim majorities.

Today is day 112 of Gao's imprisonment.  And as a reminder, I wanted to let you know that if you haven't yet signed the petition to help free Mr. Gao, please do today - please go to http://www.freegao.com

Right now we have 80,499 people who have signed the petition and 321900 people who have sent emails to the Chinese government.
YOUR VOICE does make a difference.
Please pray for Mrs. Gao and the children as they deal with the loss of their precious family member.
Watch the video and learn more about the torture Gao has undergone at http://www.freegao.com

Which VOM Book Has Affected You Most?

So far on Facebook we have people saying Tortured for Christ, Hearts of Fire and a few others.
My personal favorite book is If Prison Walls Could Speak by Richard Wurmbrand.  This book is thought provoking, encouraging and convicting.  Here's a brief description:

He was alone for three years in a prison cell, 30 feet below the ground. During that time, Richard Wurmbrand never saw the sun, touched the grass, or glanced at another human being. However, as he sat shackled and alone, he heard a very clear voice - Christ ministering to him, His voice never fading. What resulted was a man full of the love of Jesus Christ, wanting to proclaim all that God had spoken during those years of total intimacy. This book holds those proclamations of great joy from a solitary cell.