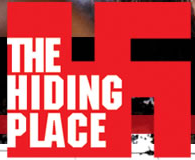 And now I have to tell you about the movie, The Hiding Place, that my husband and I watched the other night.  One of the things that I absolutely love is documentaries.  I love them because typically they are based on true life stories and in many cases they are inspirational, as this movie about the life of Corrie ten Boom was.  I had heard about Corrie for many years and even was familiar with the name of her story - The Hiding Place - but up until a few nights ago I had never seen the movie or really knew what her story was all about.

I had heard famous stories about how lice were used in her life, but I did not understand until I watched this wonderful movie based on her life.

Corrie was the daughter of a watchmaker in Holland.  She was born in 1892 and she became famous for her story of enduring persecution while in a concentration camp.  Her crime was protecting the Jews from the Nazi forces that were overtaking Holland in the 1940's.  And the amazing thing is that she was released from the concentration camp on a "clerical error" - to which I say, the Watchmaker in the sky is the Grand Cleric who set her free.

As I watched the movie, and began to realize the evil that resides in man's heart, not only did that evil strike me as totally demonic, but the love and forgiveness that only Christ gives and offers us can, and is found among even the darkest demons of darkness.

And although Corrie was the focus of the story, what really stood out to me even more is that God was the true center of this story.  God was in control and moving in the other prisoners, who didn't even know Him yet, and God was molding Corrie's heart and teaching her to ask for love where she had hate.

It's an amazing film, and I highly encourage you to watch it sometime.  It reminded me again, that even though we are all "but dust" that with the Spirit of the Living God within us, we can through Christ conquer and forgive all who hurt us.