On April 26, three Christians were killed and two others wounded in Kirkuk, Iraq, according to CNN.com.

Local police in southern Kirkuk told CNN attackers slit the throats of a Christian woman and her daughter-in-law, killing them both. Meanwhile in a nearby neighborhood gunmen attacked another Christian family shooting the father and his three sons. One of the sons died instantly and the others were wounded.

This incident is the latest in a series of attacks on Christians that have occurred in Iraq in recent years. In October 2008, more than seven Christians were killed and more than 200 families displaced. The Christian community in Iraq is estimated to be 3 percent of Iraq's 26 million people, or about 800,000. Since 2003, Christian leaders, churches and businesses in Iraq have been targeted by Islamic extremists. As a result, many believers have fled.

Today at 11:47am
PAKISTAN - Six Churches Attacked and Christian Homes Burned by the Taliban – VOM Sources

On Feb. 22, the Taliban attacked six churches, burned several Christian homes and four Bibles and injured children in Karachi, Pakistan, according to The Voice of the Martyrs contacts. Eye witnesses reported the Taliban shouting, “Accept Islam, Accept Islam, LA ILAHA ILL ALLAH MUHAMMADUR RASOOL ALLAH,” meaning there is no god, only Allah, Muhammad is the messenger of Allah. The churches attacked were: Christ United Church, Philadelphia Pentecostal Church, ARP Church, Salvation Army Church and two public churches. The Voice of the Martyrs supports persecuted believers in Pakistan. Pray for the believers who were injured in this attack and those who lost their homes. Ask God to encourage and protect believers in Pakistan who continue to stand for Him despite persecution.

A church was robbed and a pastor threatened in Sri Lanka in recent weeks, according to reports from the National Christian Evangelical Alliance of Sri Lanka. On the evening of April 5, a gang of unidentified assailants broke into a Methodist church building in the city of Dehiwela, Colombo district. Musical instruments, Bibles, hymn books and church documents, including baptism and marriage records, were stolen. Meanwhile on April 8, four Buddhist extremists gathered outside Pastor Padeep Kumara's home in the town of Weeraketiya, Hambanthota district. They demanded that he come outside and threatened to kill him. Pastor Kumara's wife, who was home with their two children, phoned her husband, but by the time he arrived home the militants had fled. Later that evening, the leader of the extremist group phoned the pastor several times and threatened to kill him if he did not leave the village by morning. He then returned to the pastor's house and threatened him with violence. When the police arrived, the extremist leader was arrested. He was released the following day and drew up a petition along with other local Buddhists against Pastor Kumara's church. The Buddhists also threatened the owner of the pastor's home with violence if he did not evict the family. The pastor's children have since been moved to a safe new location. Ask God to protect and encourage Pastor Kumara and his family. Pray that the perpetrators of these attacks will come to repentance and salvation. Ask God to enable Sri Lankan Christians to remain steadfast in the face of suffering.

Praise God! China Aid Association is reporting that on April 17 the Chinese government returned the money confiscated from Pastor Zhang "Bike" Mingxuan on March 21. "The authorities gave the money back, because of the pressure. Hallelujah! We will continue the ministry and fight for religious freedom," Pastor Bike said. Praise God for this victory. Continue praying for pastor Bike and believers in China.

The Latest on the Free Gao Petition 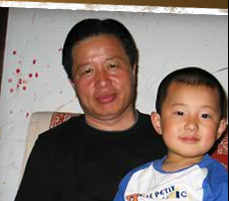 As of the time of this writing, the Free Gao petition has 58,923 people who have signed the petition to help pressure the Chinese into freeing Gao.  There have also been 228,950 emails sent on behalf of Gao.

Gao has been in prison for 82 days now, and has suffered unspeakable torture for simply being a Christian.  If you have not yet signed the petition or sent emails, please go to http://www.freegao.com and make a difference for this family.

Thank you for caring!

George Jeltonoshko knew his government did not want people propagating the gospel of Christ, but he had a stronger conviction to obey the commandments of Christ—even if it conflicted with the laws of his country.

It was not a huge surprise to him when the police came to his door. He figured it was inevitable that they would find out about his ministry activities because of the literature he had been spreading. When his trial date came, he was given a state-appointed Communist attorney. George boldly told the judge, “I don’t want a lawyer. I feel I am right, and righteousness needs no defense.”

The judge asked him, “Do you plead guilty?”

He replied, “No. To spread the good news of God’s love is the duty of all Christians.”

The judge then asked him to join the ranks of the “official churches,” which were nothing more than state-run puppet churches. But George refused. The state church followed the commandments of the state, not the commands of God.

The judge was getting frustrated. “Where do you meet for worship?” he demanded.

He was sentenced to three years in prison where George Jeltonoshko continued to carry out his work and worship. He was right. Righteousness needed no defense.

Doing the “right thing” may be a popular motto. That’s easier said than done, however, because what is right in God’s eyes often conflicts with popular opinion. The dispute between right and wrong often becomes apparent in a classroom, a workroom, and even a courtroom or church. We can’t rely on our environment to tell us what is right. People can persuade us to confuse compromise with righteousness. God’s Word is the only defense for determining what is right in every situation. Others may not understand or agree with the choices we make. However, God promises to honor our commitment to doing what is right. Those who observe us will see the light and feel the warmth of our righteous actions.

On Feb. 22, the Taliban attacked six churches, burned several Christian homes and four Bibles and injured children in Karachi, Pakistan, according to The Voice of the Martyrs contacts.

The Latest News on Gao from China Aid

WASHINGTON, DC – Today, Geng He, the wife of kidnapped Christian human rights attorney Gao Zhisheng released an open letter to the U.S. Congress, as Senator Bryon Dorgan, Chairman of the Congressional -Executive Commission on China (CECC), spoke on the case of Gao Zhisheng from the Senate floor. Gao was kidnapped on February 4 by Chinese officials and has not been heard from since.

In Senator Dorgan’s speech, he reminded the Senate that when Gao sent an open letter to the U.S. Congress in 2007, he was later kidnapped and severely tortured by Chinese authorities for more than 50 days.  Senator Dorgan stated, “…we know this situation is extremely grave because we know what the Chinese have done to him in their prison system previously. They have not offered the slightest word about his whereabouts, despite the repeated denials by United Nations agencies. We know he was seized by ten agents of the Chinese government. And our government, foreign governments, NGOs and the media have all asked for information about this courageous human rights lawyer.”

Gao’s wife, Geng He was present when Senator Dorgan addressed the Senate. In her open letter released today to the U.S. Congress, she wrote, “In the past, whenever I was worried about my husband because of his challenges against tyranny, he would often console me by saying, evil cannot win over good, the ones upholding justice will always have help. He said that if one day he would be persecuted because of his ideals and sense of justice, the people in the world who believe in justice would stand by him and support him. I know that he would still harbor this light and hope in his heart while enduring various torments in prison! …

“Honorable members of the U.S. Congress, please help me support my husband, lawyer Gao Zhisheng, so that the evil forces will know that there is resistance against persecution; so that the millions of Chinese suffering this despotic rule will know that the United States is concerned about their human rights situation, and will not give up. My husband would be more resolute because of this, the Chinese people would feel inspired because of this, and China and the world would eventually transform because of this!”

More than 50,000 concerned citizens in the U.S. and around the world have signed a petition on Gao Zhisheng’s behalf requiring the Chinese government to give an account of Gao’s whereabouts and ask for his immediate release. Today, ChinaAid president Bob Fu together with Geng He presented the petition to Senator Dorgan, and copy of the petition was also delivered to the Chinese Embassy.

ChinaAid will continue the petition and calls all those concerned for Gao Zhisheng to sign the petition at www.FreeGao.com and continue to pressure the Chinese government for his release. In addition, ChinaAid calls on all concerned Americans to contact their Senators and express their concern for Gao Zhisheng at http://www.senate.gov/reference/common/faq/How_to_contact_senators.htm.

Read the Gao Zhisheng’s open letter to the international community regarding his kidnapping and torture by Chinese authorities in 2007.

Sign a petition for Gao Zhisheng’s immediate release at www.FreeGao.com.

ChinaAid grants permission to reproduce photos and/or information for non-fundraising purposes, with the provision that www.ChinaAid.org is credited. Please contact:Katherine@ChinaAid.org with questions or requests for further information.

DUBLIN, April 24 (Compass Direct News) – Even as the North Korean government this month allowed two high-profile, U.S. Christian bands to perform at a music festival in Pyongyang, the fear of punishment authorities have instilled in North Korean Christians keeps most of them from publicly revealing their faith. As many as 400,000 Christians are estimated to worship secretly in the country, and Suzanne Scholte, head of the North Korean Freedom Coalition (NKFC), estimates that more than 200,000 North Koreans are held in political prison camps for various perceived “disloyalties” to the regime, including adherence to Christianity. Christian support group Open Doors estimates that of the 200,000 people incarcerated in political prison camps, at least 40,000 are Christians. A delegation of North Korean refugees described their experiences in preparation for events in Washington, D.C. on Sunday (April 26) through Saturday (May 2) as part of North Korea Freedom Week, organized by the NKFC. “A lot of people ask me if there really are people in North Korea who believe in Christ,” said Eom Myong-Heui, a refugee who is now an assistant pastor at a large church in Seoul, South Korea. “Do you really think that the missionaries who were there and all the believers who meet underground are all dead?”

Faith is not even worthy of the name until it erupts into action.

We would like you to take some time today to pray for the persecuted church.  Below are a few requests to start with.  If you feel led, please say a prayer in the comments section.

On April 5, a Methodist church was robbed by unidentified assailants and a pastor threatened in Sri Lanka. Musical instruments, Bibles, hymn books and church documents, including baptism and marriage records, were stolen. Pray for this pastor and his congregation. Ask God to protect believers in Sri Lanka as they courageously stand for Christ and face persecution.

Six churches and homes were attacked in Karachi, Pakistan. Pray for believers who have lost their places of worship and their homes. Pray for God’s protection in this area.