Persecution Blog: Widow of Graham Staines: "Do not give up hope, pray for India"

Widow of Graham Staines: "Do not give up hope, pray for India" 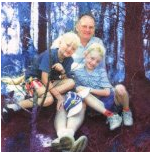 As I write this, I am confident that my brothers and sisters in India are still undergoing severe persecution, which is why we may never cease to pray for India.  Today our friends at AsiaNews.it have published a story from the widow of slain Christian Graham Staines.

by Nirmala Carvalho
10 years ago in Orissa, Hindu extremists burned alive the Christian Graham Staines and his two sons. His wife, back in India, connects the recent anti-Christian persecution to her husband. To the many recent widows of Kandhamal, she speaks of forgiveness and strength "in Christ."

Mumbai (AsiaNews) - Ten years have passed since the night of January 22, 1999, when Hindu extremists burned alive the Australian Christian missionary Graham Stewart Staines and his sons Philip and Timothy (ages 9 and 7, in the photo) while they were sleeping in their station wagon in the village of Manoharpur, district of Keonjhar (Orissa). The widow Gladys Staines talks toAsiaNews about the drama of Hindutva violence and the recent anti-Christian persecution in Orissa.

The woman has been back in Orissa since June of 2006, together with her daughter Esther. About the recent anti-Christian violence in Kandhamal, she says "I feel very sad and I am pained at their suffering." On January 22, there will be a commemorative Mass in Monoharpur, at the site of the murder. On the morning of the 23rd, a prayer service will be held at the Baripada Mission, which will conclude with the inauguration of a new physiotherapy hall.

Staines remembers her husband and sons calmly, with tenderness. "During these ten years, there have been times of sadness, I feel sad that I do not have my husband to support me, to guard me, but these are just momentary emotions of sadness which also fill me with great hope, the hope of heaven and of being reunited with my husband and children in paradise and seeing the Father face to face. This guarantee fills me with consolation.

"I cannot express that how I felt when I got the news of my husband and sons being burnt alive. I told my daughter Esther that though we had been left alone, we would forgive and my daughter replied, 'Yes, we will'."

The rest of this article is moving, please read it here.