« Pakistan: Sisters Abducted and Raped, Forced to Covert to Islam | Main | Widow of Graham Staines: "Do not give up hope, pray for India" » 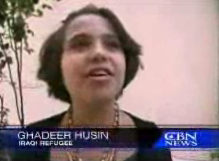 A few days ago Christian World News featured a video  about how people in ministry are helping fleeing Iraqi families - including Christian families.  Here's more...

CWN.org - More than 2 million Iraqis, including Christians, have fled their country seeking a safe and secure place to raise their families.

Nine-year-old Ghadeer Husin is one such child who has seen the devastation of war. She has studied English and various other subjects since leaving Iraq with her mother four years ago.

Not knowing whether her father is dead or alive, she is among the thousands of refugees who've left Iraq and crossed the border into Jordan fleeing the escalation of violence.