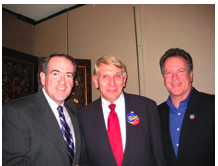 This past weekend on the Fox television show Huckabee, Mike Huckabee had on former Governor David Beasley (right) to talk about Christian persecution.  In fact, I remember watching and thinking  - "I really need to TIVO this and put it on the blog." But instead, I have part of a press release from William Murray (center) that I will share with you instead.  Here it is...

MEDIA ADVISORY, Dec. 8 /Christian Newswire/ -- On Mike Huckabee's new Fox News program, former Governor David Beasley, who has worked on numerous humanitarian projects in the Middle East since leaving politics, claimed the had failed in its responsibility to the hundreds of thousands of Iraqi Christians who have been forced to flee religious persecution in .

The official position of Secretary Condoleezza Rice is that there is no religious persecution of Christians in .

Gov. Beasley of  described on the Huckabee Show how Christians in  have lost half of their population since the beginning of the war. Just weeks ago another 13,000 Christians were forced to flee their homes in  after 13 persons were murdered. The demise of the Christian population in has taken place during the  occupation.

Gov. Beasley has been working with a coalition of organizations supporting the Iraqi Christians and other defenseless minorities. He has traveled to the Middle East to investigate the plight of Iraqi Christians along with William Murray of the Religious Freedom Coalition and Father Keith Roderick of Christian Solidarity International.

I also was able to find a video of David Beasley sharing about his experiences as he traveled and spoke to persecuted Christians.