Open Thread: What Are You Thankful For? 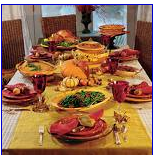 With Thanksgiving coming in two days, I wanted to open up this blog for you to share with us here at The Voice of the Martyrs, what you are thankful for this year.

Comments are open, but remember we approve them first before they will show up.
We are thankful for you! :)

In preparation for Thanksgiving, I thought I'd share with you a song from MercyMe about finally going Home. Please remember those who have suffered for our Lord Jesus and no longer have homes, or have family members with them at home this year.

Oppression of Christians in Mexico

MEXICO CITY, November 25 (Compass Direct News) – As the number of evangelical Christians in southern Mexico has grown, hostilities from “traditionalist Catholics” have kept pace, according to published reports. Especially in indigenous communities in southern Mexico, the prevailing attitude is that only traditionalist Catholics, who blend native rituals with Roman Catholicism, have rights to religious practice, according to news reports. Moreover, the reports indicate the traditionalist Catholic villagers believe they have the right to force others to conform to their religion. In Oaxaca state, four Christians in Santiago Teotlaxco, Ixtlan de Juarez district, were jailed on Nov. 16 for refusing to participate in a traditionalist Catholic festival and for not paying the high quotas they were assigned to help cover its costs, according to La Voz news agency. Their neighbors, now fewer than the town’s 180 Christian evangelicals, have been trying to force them to practice what the evangelicals regard as idolatrous adoration of saints and other rituals contrary to their faith. As a result of such pressure, non-Catholics in the area, including children, live in fear of being expelled from their properties.

You may read the full article at Compass Direct News.

Posted by The Voice of the Martyrs on November 25, 2008 at 01:57 PM in Christian Persecution | Permalink 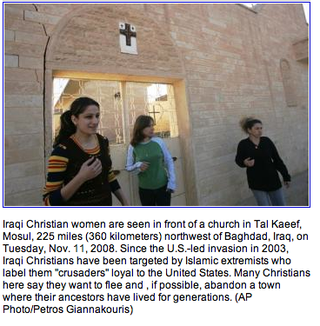 Today the Associated Press has a story about the recent persecution happening in Iraq.  Here's a snip...

"The people here look out for each other — Arabs, Christians, Kurds, Yazidis. If all of Iraq was like this, it would be a great place," said 1st Lt. Jeremy Glosson, leading a U.S. Army patrol through Tal Kaeef's medieval-like alleys.

And yet, many Christians here say they want to flee a town where their ancestors have lived for generations and, if possible, to abandon a country where their religion has survived for some 2,000 years — longer than in Europe — but one they fear is growing ever more violent.

"Nobody is threatening us, but it's still dangerous. All the Christians want to leave. I want to leave now," said Robert Esho, a 35-year-old resident, reflecting a national community on nerve-edge, where even small-scaled incidents can spark panic.

(For more images see the full article at the link above.)

Tune In at www.WARV.net to Hear Todd Today

In case you missed the interview, here is a brief rundown on our Twitter page - Click here

Want to help your brothers and sisters in Pakistan reach out with the love of Christ? Our co-workers in Pakistan have asked us to send 10,000 Action Packs as soon as possible. These Action Packs with basic living items inside are a huge blessing for people in need. The Action Packs are specially designed, preprinted vacuum bags that are filled by you with blankets, clothing, towels and other new or gently used items. Each Action Pack comes with instructions about what can be placed inside.
CLICK HERE TO LEARN MORE AND TO WATCH A SHORT VIDEO

Standing On the Hands of God's Angels

He was the most wanted criminal in all of Saudi Arabia. He was not wanted for robbery, or murder, or rape. He was wanted for being a Christian pastor and for leading a large secret church in the Saudi Arabian capital city.

Without being charged, Pastor Wally was taken from his home and into a room with three men. There he was slapped, kicked, and punched. The most painful abuse was the lashes on the bottoms of his feet. When the lashing was done, his hands and feet were the purple color of eggplant.

In the midst of that pain, the torturers ordered Wally to stand. “I cannot,” he told them. Every square inch of his feet hurt, and there was no way to support his weight. “Please just allow me to kneel.” The torturers refused.

While the three men beat him, Pastor Wally prayed for them. His prayers reminded him of a verse. “For he will command his angels . . . they will lift you up in their hands, so that you will not strike your foot against a stone” (Psalm 91:11–12). In spite of his feet, Wally stood straight up among the men. They were shocked that he could stand after such a beating.

“I was standing on the hands of God’s angels,” Pastor Wally later said. “They could not see angels, but I felt that they were there to help me stand.”

Some people seem to send their guardian angels into overtime. Like Pastor Wally, they are constantly on the edge for Christ with a prayerful witness and a daring spirit. Still we might imagine that some guardian angels have time on their hands, assigned to Christians who do nothing to further the kingdom. While Pastor Wally’s situation was unique, his prayer should not be. Sometimes we must stand on the hands of God’s angels in order to be faithful to Christ. Do we exude that type of fervent desire in our workplace? Our homes? Our school? Wherever you find it difficult to take a stand for Christ today, ask God to send his angels to give you a lift.

Iran's Christians are calling on churches worldwide to join them in three days of praying and fasting this weekend.

Elam Ministries, a group that supports Iranian Christians, says the church has come under increased persecution this year, including the introduction of a law requiring the death sentence for men who leave islam to follow christ.

Women would face life in prison.

In an initial vote, Iran's Parliament approved the measure overwhelmingly.
It is now under review before a final vote and approval by the Guardian Council.

Christianity Today had an interesting article this week written by Ruth Moon.  Here's a snip for you...

Correction: This article originally incorrectly identified Bruce Klingner. He is a senior research fellow at The Heritage Foundation. We regret the error.

The United States removed North Korea from its list of state sponsors of terrorism in October, but observers say Christians still have much to fear from its government.
"As long as the Kim Jong Il regime and its successors remain in control, [North Korea] is going to be a brutally repressive country," said Bruce Klingner, a senior research fellow at The Heritage Foundation and former North Korea analyst for the CIA. "It's going to continue to be a dismal future for Christians."

The Center for the Study of Global Christianity estimates that there are 467,894 Christians in North Korea and 10,592 Christian martyrs each year. Open Doors ministry lists the country as the world's worst religious persecutor.

Observers say that even the death of Kim Jong Il, rumored to be in poor health, may not improve conditions.

"Our contacts are telling us that in the short term, it doesn't matter," said Todd Nettleton, spokesman for Voice of the Martyrs. "The people who brought Kim Jong Il to the throne are not going to suddenly decide, 'Hey, let's let Christians worship freely.'"

Posted by The Voice of the Martyrs on November 21, 2008 at 01:23 PM in Christian Persecution | Permalink

This week the team discusses updates on Pastor Bike’s family, recent political changes in Kyrgyzstan, and the escalating persecution in Iraq. Todd also interviews a VOM worker about Afghanistan.